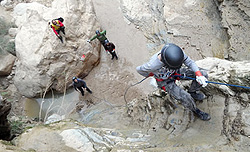 Jordan and Palestine – Bethlehem University students participated in the Challenge, organized by the Jordanian Adventure and Exploration Center (JAEC), taking third place, only seconds behind their competitors. The Challenge, pitting Palestinian university student teams in a spirited competition against each other, consisted of a series of physically and mentally challenging contests, aimed at fostering a sense of team spirit in the students while teaching them basic survival skills. For Bethlehem University students, it was the first such experience.

Wilderness challengeThe Challenge started from the moment the Bethlehem University delegation arrived at the Jordanian border, where they were welcomed by Captain Thaer and his staff, who led all participants to the Al Karama Camp, were students started their adventure by setting up their own camp sites. Led by retired officers of the Jordanian services and civil youth group leaders, physical training commenced, where students participated in endurance training, ‘free landing,’ mountain climbing, rappelling, and even learned navigational skills, without the aid of GPS.

The students also slept in the wilderness, overseen by chaperone Ms. Mai Jaber, Assistant to Dean of Students, whose office coordinated with the JAEC to get students involved in the Challenge. Captain Khalid Makablah and Captain Ayman Al Sars oversaw the actual training, encouraging the young men to push themselves and complete their tasks. In the midst of the student’s exercises, they were able to take moments to enjoy the beautiful Jordanian landscape, which contains beautiful mountains and waterfalls, located in ‘Wadi Hamra.’

Wilderness challengeOn the last day of the Challenge, participants travelled to Amman for the closing ceremonies, where the winners were announced. Present for the judging and awards were Dr. Nayef Saada, Assistant Minister of Youth and Sports, along the Jordanian sponsors, and representatives of the civil defense and public security services. Bethlehem University, for its part, presented a plaque of thanks and appreciation to the Minister of Youth and Sports of Jordan. H.E. Dr. Mohammad Nuh, as well as a plaque to Capt. Thaer Ayyash, Director of JAEC and organizer of the tournament. A third plaque was presented to the Dean of Student Affairs at Al-Najah University. Judges were Dr. Iyad Maghayra, Assistant Professor at the University of Balqa, Mr. Adam Amawi, Mr. Hani Tashman, Mr. Nader Al Rifai, Mr. Khalil Farhood, and Mr. Ayman Mathhar, Scouts Director Al-Najah National University.

Bethlehem University Dean of Students, Mr. Mahmud Hammad, Dean of Student Affairs, who oversaw the project, feels that this experience was essential for the students. “It is important that our students not only learn about teamwork and cooperation, it brought out a sense of pride and achievement. I’m extremely proud of Bethlehem University’s students, who won third place, even though this is the first time they even went through physical training of any kind. Our performance, during the Challenge, allowed organizers and participants to see the caliber of students at the University.” Mr. Mousa Abu Dayyah Dean of Student Affairs at the of Al-Najah National University congratulated the Bethlehem University students, noting their poise and determination.