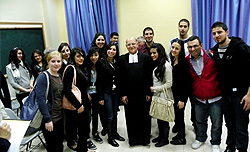 Important Lasallian universityAs the 26th successor to Saint John Baptist de La Salle, the Founder of the De La Salle Christian Brothers almost 350 years ago, Brother Álvaro’s primary responsibility as Superior General is to ensure, support, embody, and serve as the “guarantor” for the charism that was John Baptist de La Salle’s, of which Bethlehem University is a honored beneficiary. When Pope Benedict spoke about the importance of inter-religious dialogue during his 2009 visit to the Holy Land, he made special mention of the outstanding achievements of Bethlehem University. When Cardinal Timothy Dolan visited Bethlehem University in January 2012, he stated that “When [I] come to a place like this, and see what Bethlehem University does to bring people together – who become not only schoolmates but friends – that is religion at its best.”

Important Lasallian universityBrother Álvaro’s statements also centered around a strong sense that “Bethlehem University is an oasis of peace and a beacon of hope in this Holy Land, a most important place in the international Lasallian educational world.” The Brothers and our Lasallian partners of all faith traditions engaged in this unique educational system, spread over 80 countries, which works to educate people in academic settings that vary from primary schools to universities and medical and law schools. Brother Álvaro, in his person and in his office as Superior General, is an embodiment of those qualities and characteristics that are so true of our Founder, Saint John Baptist de La Salle: faith and zeal, commitment to justice and service on behalf of the poor, and creative teaching and love of those students, of all ages, ability levels, and cultural backgrounds, who have been entrusted to his and our care.

Important Lasallian universityStudents, staff, and faculty engaged with Brother Álvaro throughout the visit, who entranced – and was entranced – especially by the students, who helped to host him and his companions. The most touching conversations took place in a classroom in historic De La Salle Hall, where now Executive Vice President Dr. Michel Sansur, once studied as a young Brother’s primary school student. Many students expressed how surprised and relieved they were to find a loving atmosphere, where they were welcomed with loving arms by the Brothers – Muslim and Christian alike – and the sense of familial community created there. “At this University, my teachers know my name. They give me lessons and make those lessons real because our relationship is not just one of instructor and student. They know me. They know what I need to move forward. This is what makes me so happy to be here,” commented student Maggie Al-Sous ’14.

Other students confessed to Brother Álvaro that they did not expect to find such a quality education at Bethlehem University, hoping to travel abroad to larger universities. “I tried one semester abroad and I found myself extremely lost and uncomfortable,” said Ahmad Yaish ‘15, “But when I decided to give Bethlehem University a try, I realized that I had come home. Here I was able to get a great education and enjoy my life, in my own surroundings.” Many students gave testimony that through the University, they were able to remain in their country, with their families, and get the knowledge and tools they need to build the future Palestine. “Knowledge is liberation,” stated Dr. Michel Sansur. “Here, we offer knowledge, which is the one thing that no one can take away from us.”