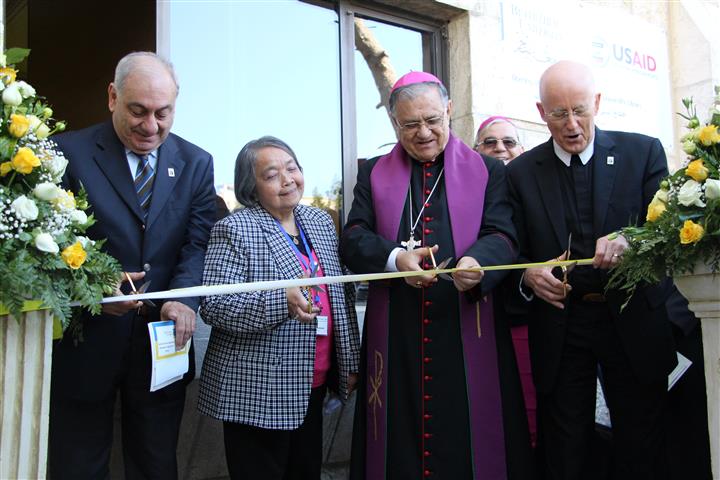 On February 24th the  renovated University Library yesterday was festively opened in the presence of  the International Board of Regents and the Board of Trustees as well as Mr. Thomas Staal, the USAID-ASHA representative. H.E. Excellency Giuseppe Lazzarotto, the Apostolic Delegate to Jerusalem and Palestine was also present, as well as His Beautitude Fouad Twal, the Latin Patriarch.

The renovated Library is now equipped with study areas both for groups and individuals, as well as state of the art library technologies such as a digitized book-loan system, ample computer areas, and space-saving tools to keep books and other library resources centralized without taking over too much space. It also features a cozy café for relaxation and lively group discussions, as well as a garden. Both café and garden are intended to encourage interactive learning and to allow students and faculty members to spend as much time as needed within the Library’s premises.The renovation of the library started in May 2015 and Dr. Mellie Brodeth, Library Director, and her team have worked tirelessly to continue to provide library services to students and faculty members in the temporary library in Sansour Hall.

The festive ceremony was opened by Dr. Michel Sansour, Executive Vice President of Bethlehem University, with the National Anthem. Vice Chancellor Brother Peter Bray addressed the attendees, expressing his gratefulness to all who helped enable the renovation of the Library. He especially thanked the architect, Mr. Graham Ormsby, as well as the Capital Projects Committee for leading the renovation process and the Osaili Company who did the actual renovation work. He also addressed the library staff and said they have an important and indispensable role in the educational process. Brother Peter Bray stressed the importance of bringing the library into the 21st century, after the library’s addition to Bethlehem University in 1977. It was the first building built by Bethlehem University in addition to the existing De La Salle Building.

Mr. Thomas Staal, the USAID-ASHA representative also addressed the attendees saying it was a special privilege for him to be able to attend the ceremony. He emphasized the global need for good quality education is taken very seriously by USAID-ASHA.  The renovation of Bethlehem University’s library allows for higher educational quality at Bethlehem University as it is fully equiped to fulfill its  21st century role as information and intellectual hub on campus. He also said USAID-ASHA is grateful to have been part of the building and renovation of every building on Bethlehem University’s campus. USAID-ASHA has been the biggest funder of the library renovation project with a contribution of  1,575,000 USD.

H.E. Guiseppe Lazzarotto spoke about the characteristics of a Catholic University, and Mr. Fuad Kattan, Chair of the Board of Trustees, shared his views on characteristics of a Lasallian university. His Beatitude Fouad Twal gave a blessing on the Library, praying for protection and a growth in knowledge and wisdom.

The ceremony was followed by a tour of the renovated library and a reception on the rooftop patio.