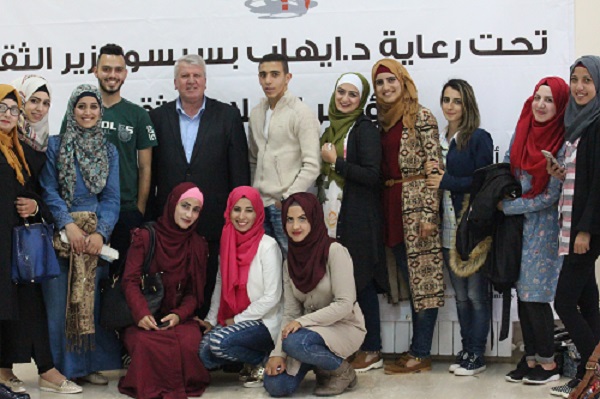 It gives us great pleasure to introduce to you in our regular feature Faculty in the Spotlight for the new academic year 2017-2018, Dr. Said Ayyad, Assistant Professor of Journalism, Chair of the Arabic Department, and ex-director of the Palestinian Broadcasting Corporation.

Dr. Said wss born in Bethlehem to an educated family with limited means and was raised on the values of self-reliance, independence, and freedom of opinion. During his school years he spent a good part of his time working, especially in summer vacations, to help his family pay for his education and in keeping with the wisdom of his late father that “If you start your life depending on others, it will surely end the same.”

Dr. Said excelled in his studies since his early days in school and developed a passion for reading, writing and acting. He was also attracted to journalism since his early youth. He recalls that during math period in the sixth grade, he was caught writing a news report about a demonstration in Bethlehem. After reading the article, the irritated teacher told him: “You are going to be a famous journalist one day.”

While in high school, Dr. Said had some serious forays into writing short stories. He always shared his writings with his Arabic teacher, who did not hesitate even once to encourage him to keep on writing. This experience helped him to cultivate and nurture a critical sense towards commonly accepted social practices and commonly held beliefs and thoughts. He always asked the question, “What is left unsaid or unknown here?” and was completely convinced that there is always a different opinion from what he believed in or thought.

Dr. Ayyad went to school in Dheisheh Camp, Beit Jala, and Bethlehem during the heyday of Arab Nationalism and he found himself in the midst of a diverse student population with great religious, cultural and political diversity. Such an environment strengthened his belief in pluralism and had a great impact on his intellectual and political maturity, prompting him to join the PLO (Palestine Liberation Organization) at an early age. Nonetheless, he had an aversion to partisanship and called instead for political unity and was often asked to come up with slogans and jingles. Because of his knack for journalism and writing, moreover, he was invited to speak at national political rallies. These experiences helped develop his sense of critical journalism.

Dr. Said holds a master’s degree in Educational Administration from Al-Quds University. At that time he invested much of his time in reading works in philosophy and critical theory, in a way that grounded his political and intellectual affiliation. He completed his doctoral work in Educational Psychology at the University of Mohamed V in Morocco in 2008. During his stay in Morocco, he was radically influenced by the pluralism and critical animus of Moroccan philosophy. His doctoral thesis examined the role of television programs in developing creative thinking skills among pre-school children. He worked with children out of his belief in the need for fashioning a new Palestinian generation that questions social and cultural norms, and assumptions, and takes nothing for granted. Moreover, Dr. Said is a staunch believer in the important role of the media in developing critical understanding, creative thinking, and an awareness of the unsaid necessary among members of the general public.

Dr. Said ventured into the world of professional journalism in 1978 and since then he has been a regular contributor to many local newspapers. Dr. Ayyad has worked as a journalist for several Palestinian and international organizations, including Reuters, for which he worked ten years. He founded Bethlehem TV and Al-Akhbar Daily. He also assumed the position of Director of the Palestinian Broadcasting Corporation, general director of the news section, and later was appointed as Adviser to the President of PBC. Dr. Said was considered one of the most important news anchors and interlocutors; hosted hundreds of television news and interview programs, including the Diplomatic Bag and Today’s File, which had an important political and cultural resonance.

Dr. Said was one of the founders of the Palestinian Journalists’ Syndicate and was a member of its board of directors for many times and also served as secretary. He was also one of the founders of the Palestinian Writers’ Union, the Cultural Pen Club and the Creative Cultural Forum. He was elected as Chairman of the Television News Arbitration Committee of the Arab League Broadcasting and Television in 2012. Over the years, Dr. Ayyad has received dozens of appreciation awards from Arab and Palestinian institutions for his contributions to the field of journalism. He has participated in many journalism workshops in Europe and the US.

Dr. Said maintains that an active record of scholarship and research is indispensable in the study of mass media. Therefore, he devotes a good part of his time and effort conducting research in the field. So, far, Dr. Ayyad has published three books: The Struggle of the Palestinian Political Mind, The Role of Television in Creative Thinking and The Fundamentals of Broadcast Media. His novel The Shadow of God is forthcoming. He has also conducted 32 research projects in the field of media journalism, most of which have been presented at local, regional and international conferences, symposia or professional meetings. Professor Said believes that any social change must be based on in-depth study of reality.

In support of the culture of excellence in research at Bethlehem University, Dr. Said has also received a Bethlehem University Internal Research Grant fora project that examines the political and mass media terminology used in the Palestinian and Israeli discourse. For him, this project is the first step towards a much more comprehensive and ambitious project that aims to put together a “Glossary of Media Terminology in the Palestinian-Israeli Conflict.” Two years ago, Dr. Said joined BUJ Editorial Board as Associate Editor in an effort to promote a solid culture of excellence in research at BU and in the region.

Dr. Said strives to ensure that the research, in which he engages, is closely related to his pedagogy and teaching practices. This pedagogy is based on a number of critical principles or maxims that he imparts to his students and can be summed up as follows: “There are neither universal axioms nor unquestioned assumptions; Nothing should be taken for granted without discussion; Do not let the past think for you; Use your mind in everything that you are involved in; Judge the idea, not its author; Be certain that that there is always a different another view and opinion.”

To promote creativity among his students, Dr. Said encourages them to produce documentary films that investigate the hidden and unspoken aspects of social phenomenon, to publish their reports on the private website of the journalism program, The Nativity, and to participate in the various colloquia organized by the Arabic Department. Furthermore, Dr. Said and his colleagues in the Arabic Department have organized many conferences and symposia on Arabic language and literature, Palestinian culture, media journalism focusing on pluralism and respect for others. It is worth mentioning that last year, and in collaboration with The Institute for Community Partnership, the department published a collection of essays and stories by their students.

Dr. Said believes that there are many challenges that obstruct the development of a culture of excellence in research in Palestine, most importantly the lack or scarcity of funding and the difficulty of publishing in high Impact Factor journals. Nonetheless, he maintains that establishing a strong link between the university and the community is quite essential for the development of research. Culture.

Dr. Said hopes to leave an indelible mark on the Bethlehem University community, by developing an independent journalism/media department. He also would like to modernize the Arabic Department so as to cope with the latest trends in the study of language and literature, in a way that distinguishes the department’s brand in its curriculum, programs, and specialization. Dr. Said admits that such projects require a clear and collective vision that his colleagues in the department share with him—the idea is collective and the effort is collective as well. As a first step towards change, the Department has moved for the first time towards the localization of knowledge through the production of course materials designed by the members of the Department. Dr. Said hopes to achieve his old dream of creating a cultural museum for the city of Bethlehem, to be launched from Bethlehem University, in an endeavor to preserve the cultural, literary, artistic, and media heritage of Bethlehem.