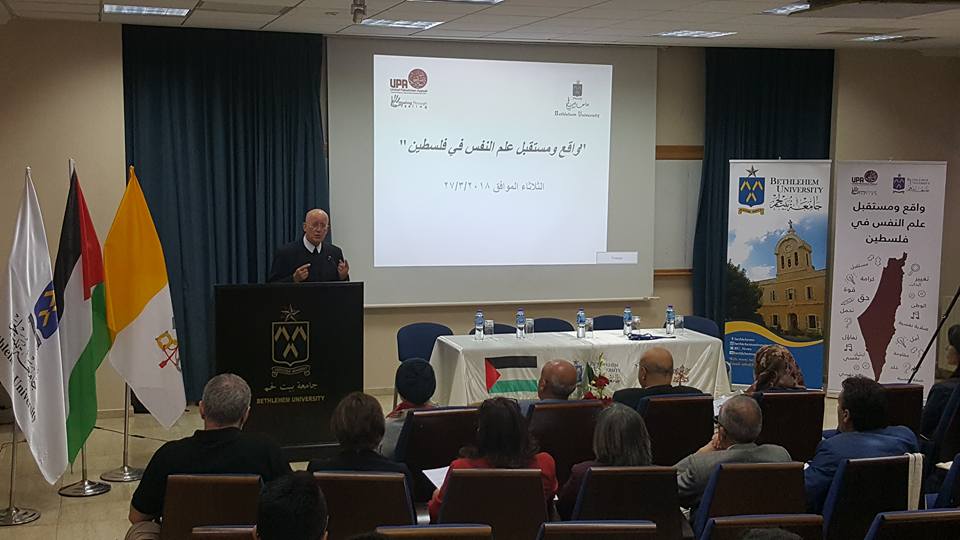 “Psychology in Palestine: Reality and Future”

The Social Sciences Department at Bethlehem University held its sixth annual conference entitled “Psychology in Palestine: Reality and Future” under the patronage of the Palestinian Ministry of Health on Tuesday, 27 March 2018.

Br. Peter Bray, Vice Chancellor of Bethlehem University, talked about the effect of the psychological factor on students especially with the presence of the occupation and barriers they face on their way to the university. The unpredictability of the situation here has a huge impact on the way in which young people grow up.

Br. Peter said that Bethlehem University focusses on providing students with psychological security through three main aspects: to feel safe on campus, to be cared for, and to be in a predictable environment. He concluded by wishing the attendees a successful conference.

Ms. Hanadi Younan, Dean of the Faculty of Arts, spoke of the need to raise a generation with good psychological health, especially in this difficult situation under occupation. She stressed the importance of raising awareness in this area, noting that the subject of mental health is neglected in general in Palestine.

Dr. Ferdoos Al-Issa, the Chairperson of the Social Sciences Department, thanked the Preparatory Committee for all their efforts put into the success of this conference. She added that this conference is part of the changing social, intellectual and historical contexts in the twenty-first century, highlighting the reality of psychology in the colonial context.

Dr. Ferdoos explained that this conference gave particular attention to the scientific vision of the psychology theories and its clinical or research applications.

Mr. Hanna Rabah, the director of programs for United Palestinian Appeal (UPA), said that the UPA is honored to support this critical conference because of its focus on Palestine and the Palestinian professionals who attend.

The UPA is the oldest Palestinian-American Non-profit organization working to support Palestinians. UPA’s programs and projects are distributed across four program areas: Health and Wellness, Education, Community and Economic Development, and Outreach.

On behalf of the Palestinian Ministry of Health, Dr. Issam Bannoura, Director of Dr. Kamal Mental Health Hospital in Bethlehem, said the theme of this conference is very important as there is an urgent need for a deeper understanding of the psychological disorders and behavioral issues resulting from the Israeli occupation.

The conference dealt with three main issues: psychology in the Palestinian context, problems and mental disorders in Palestine, psychological services and community awareness.