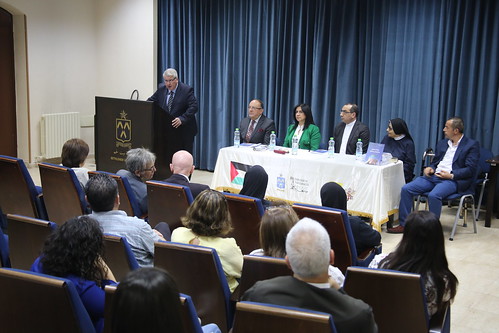 The Arabic Department at Bethlehem University held a launching ceremony for Sister Raymonde Cobin’s book “the world is my homeland and people are my brothers and sisters” on Monday, 20 May 2019.

Chairperson of the Arabic Department, Dr. Said Ayyad, welcomed the attendees after playing the Palestinian anthem. He said the Department was proud that Sister Raymonde was one of the Faculty members for years.

Executive Vice President, Dr. Michael Sansur, thanked Sister Raymonde for giving him the opportunity to read the book and criticize it. He described the book as full of passion and said it was a precious gift for our time.

Former Mayor of Bethlehem, Ms. Vera Baboun, praised Sister Raymonde as they were both colleagues working in the Faculty of Arts at Bethlehem University. She said the importance of the book lies in being a summary of Sister Raymonde’s experiences, principles, values, and behaviors.

Director General of the Latin Patriarchate Schools, Father Iyad Twal, said he was honored to be one of the first who read this deep and rich book. He added that the book is not a scientific research and has no bibliography, but it tackles different subjects that emphasize people are living in one world.

Faculty member of the Arabic Department, Dr. Ziyad Banishamsa, said he read the book twice to be able to understand its deep meaning and to write a literary review about it.

At the end, Sister Raymonde Cobin thanked the audience and Bethlehem University for their continuous support.