Nicola Juha and His Love for Icons 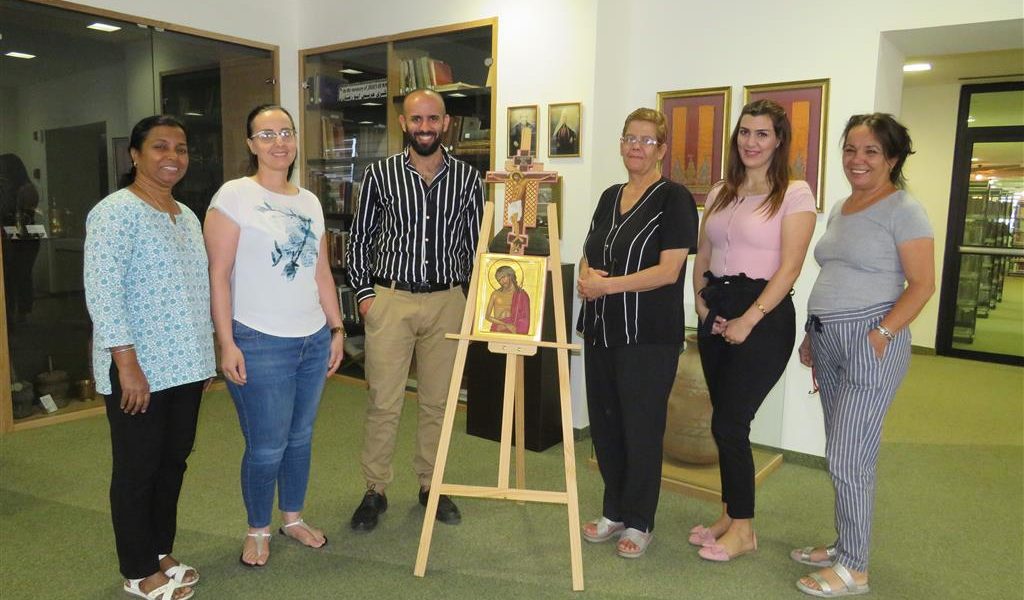 Nicola Juha was born in Bethlehem and went to Terra Sancta School for his elementary and secondary education.  He studied law at Birzeit University near Ramallah.  He loved painting since he was young. He received a prize in an Italian drawing competition when he was still at school and won a prize once again for his paintings while studying at the University. He continued to paint in his free time, even painting on the wall of his apartment at Birzeit.

During his law training Nicola went to Dar El-Kalima College in Bethlehem for an art course and there met a nun who introduced him to iconography. He joined the Bethlehem Icon Centre and subsequently became the director of the Centre in 2015. He started teaching children iconography in 2019 as he strongly believes in their abilities to paint icons.

When he completed the course given at Dar Al-Kalima, Nicola went to England and worked with professional Iconographers for some months, which gave him a great learning experience acquainting him with the process and meaning of icon painting; then he continued with the prosopon icon course given by a Russian Iconographer, and learned more about the old Russian Icon techniques in Italy.

We can truly say after meeting Nicola that each person has her/his own talent received from God. However, in icon painting, talent and spirituality go together. Before the pandemic Nicola used to go to Jerusalem and visit the Holy Sepulcher and other Holy Places to get inspiration.  However, with the COVID-19 and the lockdown, it was difficult for Nicola to do this and thus going into the mood of painting icons was also hard to achieve. Nicola does not consider icon painting as a job but as an inspiration and a spiritual experience coming from the heart. He listens to hymns as a way of placing himself in the “mood.”

In addition, Nicola explained that icons are expensive because materials used are natural and sometimes not easily found. Secondly, one has to invest quality time into icon painting; some icons would take two weeks, a month or longer.

The problem that he faces sometimes is that in Europe there are some types of wood that he can use and are easier to work on but we don’t have them here in Palestine. After carving the wood, he uses a piece of cloth which is used to connect and stick the wood with the gypsum together. The real icons are made from products of nature which means that they are from animals or stones. There are many techniques that are used to do icons, and this technique was even found before the time of Jesus Christ, for example, the first people who did the paintings with tempera techniques (using eggs and nature colours) were the Pharaohs and Canaanites. He continues that he uses the gold before the painting of the icons and the material of the paints are powder and it’s from ground stones that he gets from Jericho, Jerusalem or Eilat. The greenish and blueish stones are available in Eilat; in addition, the way from Jericho to Jerusalem has a lot of reddish and brownish stones. The rest of the colors he buys them from a special market that has a lot of colors.

We now feature Nicola with his icon paintings. We are grateful to him for giving us his time and sharing with us his God-given talents.

By the Library Turathuna Team, from an Interview with Mr. Nicola Juha