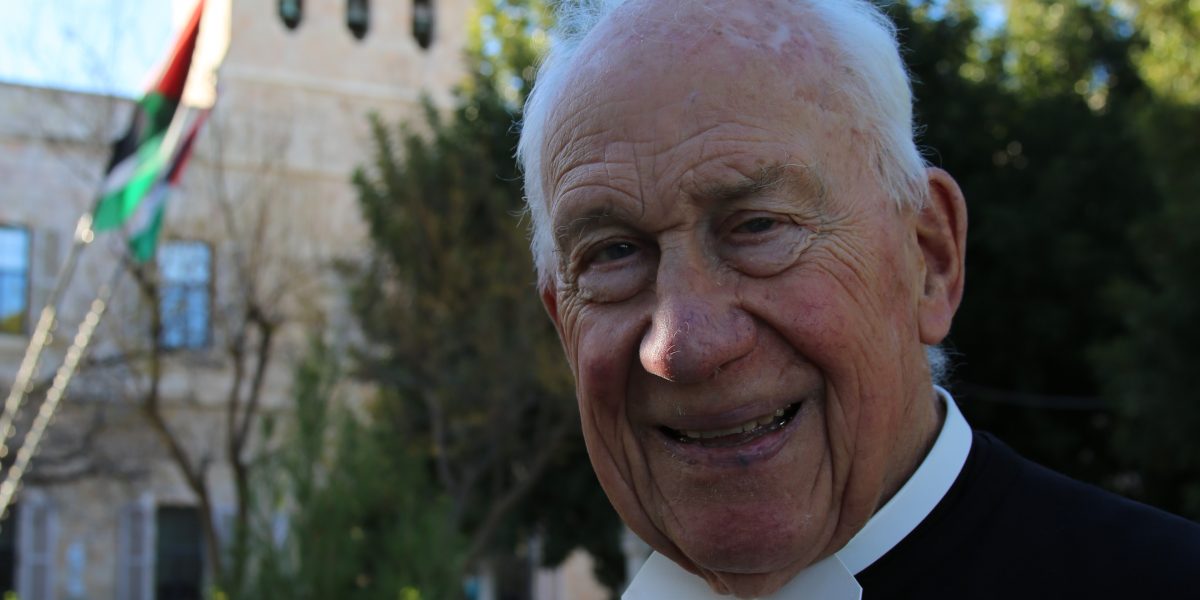 Brother Joe passed away peacefully at the age of 95 on Thursday, 18 February 2021, at the De La Salle Hall Nursing Home for the Brothers in Eastern North America.

Brother Joe was a permanent fixture at Bethlehem University for most of its existence – educating thousands of teachers, civil society and business leaders, parents, nurses, scientists, and Church workers. He has been recognized by many for his devoted work in Palestine, particularly with those living in Palestinian refugee camps as he spent over 42 years in Bethlehem.

Brother Joe, you touched the hearts of many of us here at Bethlehem University as well as people in other places where you have served as a Brother. We are grateful to God, to your family, and to you for sharing your life with us and in doing so enriching our lives. We bid you a final farewell filled with fond memories. May you rest in peace.

Brother Joseph Loewenstein was born in Queens, New York, in 1925 where he grew up alongside two siblings during the depression. He attended an elementary school run by Dominican Sisters, the parochial school of the Brooklyn diocese of Elmhurst, Queens. The diocese offered scholarships for students to its secondary school, Bishop Loughlin Memorial High School, which was run by the De La Salle Christian Brothers.

At 15 years old, Brother Joe left home to go to a training school for boys interested in joining the Brothers. He graduated in 1943 and went to Novitiate for one year’s training in the Brotherhood, after which he enrolled in Catholic University in Washington D.C. His class was sent to various schools after three years, before completing their Bachelor’s degrees, since there was a shortage of teachers during World War II.

Brother Joe’s genuine interest in and compassion with students stems from his time at Lincoln Hall Correctional School for Boys, where he worked for four years between 1956 and 1960.

Before coming to Bethlehem, he had completed his doctorate in Education at UCLA, specializing in Administration and Supervision. This topic had garnered his interest while working in Kenya with the Kikuyu tribe at a teachers training school and later as headmaster of a secondary school in the same area. It wasn’t an easy time to be in Kenya, in the aftermath of the Mau Mau uprising and the subsequent independence from colonial Britain.

When Brother Joe came to Bethlehem University in 1975, he was ready for a new challenge. First, he taught for a while without assuming a leadership position, after which he became the first Vice Chancellor and passionately took up leading the new university. Bethlehem University had only opened its doors in 1973 and not all educational facilities were yet on track.

Brother Joe proceeded to enlist new people to lead the faculties and established deanships to decentralize leadership. He also added Nursing to the curriculum after requests from local doctors. Nowadays, the Nursing program is one of Bethlehem University’s most successful programs.

While teaching at Bethlehem University, Brother Joe has also been a member of the CNEWA family for a long time. For several years, in the 1980’s, he served as the director of CNEWA’s regional office in Jerusalem.

From the day he arrived, Brother Joe’s passion was making university-level education available to young Palestinians.  He loved working with individual students as a tutor and mentor, and he did everything he could to procure financial aid to help those students most in need.

In 2013, Brother Joe was honored with a Doctor of Humanities, honoris causa from St. Mary’s University of Minnesota. The fellow Lasallian university conferred the doctorates during its celebration of De La Salle Week and its founding 100 years ago.

At the 2017 graduation ceremony, the mayor of Bethlehem made Brother Joe an honorary citizen of Bethlehem – his second home. Brother Joe received a standing ovation from students and families alike in tribute to his dedicated service to the community.

In August 2017, Brother Joe took a very difficult decision for him which was to enter De La Salle Hall for elderly and physically ill Brothers. In his farewell note to the Bethlehem University community, Brother Joe wrote “I am sincerely grateful to all of you, faculty, staff, students for your concern for me and for your friendship over the years. I will never forget the experience of living in Palestine and working with you all these years particularly these last couple of years when I began to show my age.”