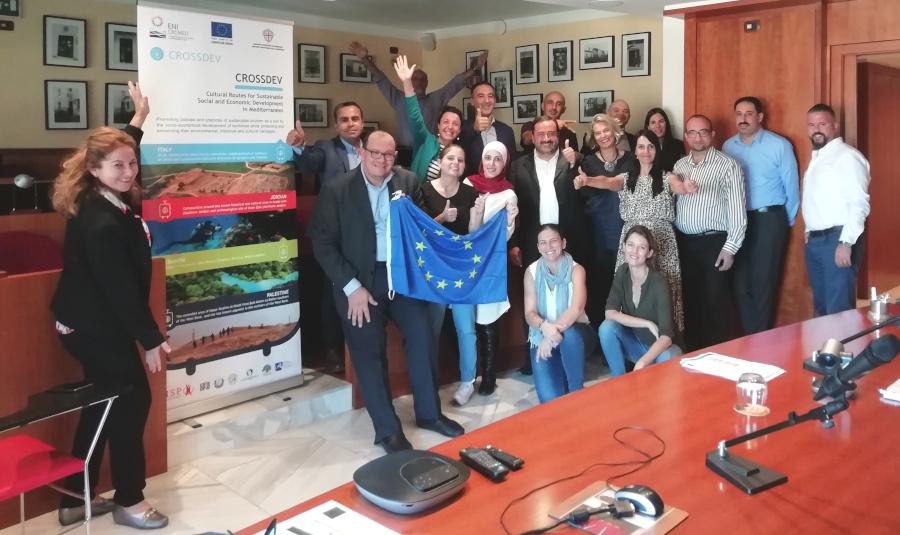 Bethlehem University, represented by the Vice-Chancellor Br. Peter Bray, signed a cross-border agreement with four other universities in three Mediterranean countries to cooperate to create strong communities and to design people-centered tourist experiences, within the EU-funded CROSSDEV project.

In addition to the Institute of Hotel Management and Tourism at Bethlehem University, the universities involved in the project are, The Jordan University of Science and Technology, The Center for Advanced Studies in Tourism (CAST), Alma Mater Studiorum University of Bologna, The Palermo University – Department in Economics, Business & Statistic together with the Agrigento Territorial University Pole, and The American University of Beirut.

Mr. Elias Juha, Acting Director of the Institute of Hotel Management and Tourism at Bethlehem University said “This agreement will create opportunities for our faculty members and students to work together with their international colleagues from these six universities to develop different activities related to sustainable tourism such as; developing researches, conferences, students exchange and online classes.”

The Cultural Routes for Sustainable Social and Economic Development in the Mediterranean – CROSSDEV – is an ENI CBC MED project lead by Italian NGO CISP (Comitato Internazionale per lo Sviluppo dei Popoli) and aimed at using sustainable tourism as a tool to boost the local economy and socioeconomic development in selected areas of Italy, Jordan, Lebanon, and Palestine.

Following the agreement, representatives of the involved university have already met to design a compelling action plan for the coming months. The first joint training is being scheduled for Palestinian students and stakeholders selected by CROSSDEV’s partner Palestinian Heritage Trail. Focused on involving communities in the creation of sustainable tourism products and raising awareness among locals, the training will be held in the next few weeks. The involved professors have already announced targeted subjects to teach for the program and, vice versa, the needs for their own students that could be fulfilled by international colleagues.

Lastly, an inter-university meeting has been programmed for next autumn to focus on new technology and the digitization of tourism products. The issues will be addressed both from a scientific and a humanistic point of view within the sciences of tourism, with the involvement of one of CROSSDEV’s sister projects, MEDGAIMS, also funded by the ENI CBC MED Programme.