Palestine Travellers are flying the flag for their country 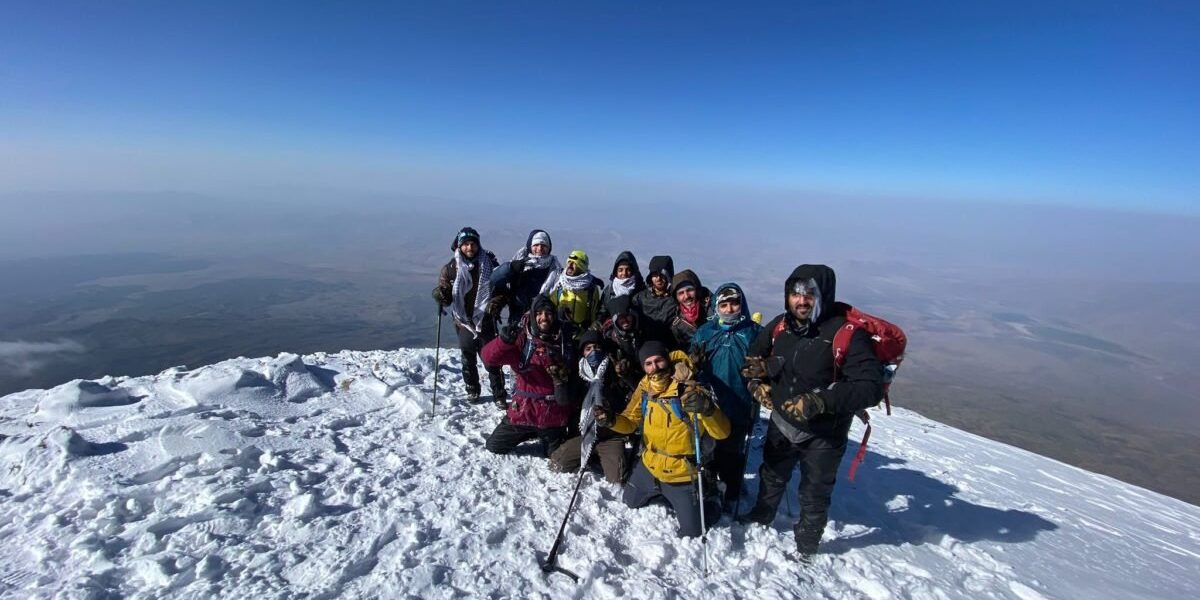 Last week, the founder of Palestine Travellers, Ramzi Abbasi, posted a video on Instagram showing the moment when he and his friends held the flag of Palestine aloft at the summit of Mount Ararat in Turkey. At 5,137 meters above sea level, it is the highest peak in the Middle East. The group which made it to the top with Abbasi consisted of 12 young men and women from Palestine.

“The message we want to send when we climb is that Palestine is a reality, and Palestinians are everywhere,” Abbasi told me. “We go climbing to express our presence, our patience, our strength, our perseverance and our love of life.”

This was not the first time that Palestine Travellers have flown the flag on a mountain top to raise awareness about Palestine. They have conquered Mount Kilimanjaro in Tanzania and Mount Elbrus in Russia, as well as Everest Base Camp.

So why Ararat this time? “Turkey was the only country we could go to because of the coronavirus restrictions,” explained Abbasi. “Moreover, the cost of climbing there is relatively inexpensive.” This is an important factor, as the group’s activities are all self-funded.

The group had to go via Jordan because Turkey is on Israel’s “red list”. This means that when the climbers get back they will be fined.

“Israel will punish every person with blue ID by fining us more than $1,200 per person. Despite knowing that this would be the case, we decided to go anyway to raise the Palestinian flag on Mount Ararat.”

The climb itself was arduous; a real challenge. Snow and high winds made it both difficult and dangerous.

Abbasi’s video has been shared many times on social media, with activists in the occupied Palestinian territories, especially Jerusalem, expressing their pride in the achievement of Palestine Travellers. The international exposure has boosted the campaign for freedom and justice.

“We did not expect such a response,” said Abbasi modestly. “Even the Hebrew-language newspapers covered the story. This confirms the importance of our achievement in flying our flag on the highest possible peaks.

Palestine Travellers was founded four years ago and has around 200 members, men and women, from Jerusalem and the occupied territories. They normally take trips to various Palestinian areas in order to document Palestine’s culture and heritage. The idea for the group emerged from the shared passion for Palestinian history and geography. Abbasi and his group take the responsibility to tell people about the land of Palestine and its geographical features. “For us, this is an important and necessary part of our Palestinian identity, especially those who live under occupation.”

Ramzi Abbasi himself was born in Jerusalem and lives in the village of Silwan. He graduated from the Faculty of Physiotherapy at Bethlehem University in 2009 and works as a physiotherapist for children with special needs. He played a prominent role in recent events in Jerusalem, as one of the prominent activists in the social media campaign to publicise what is happening there.”We made our voice heard around the world and told people about our situation, the injustice and the racism that Palestinians face in Jerusalem, including the ethnic cleansing, demolition policies and settlers’ provocation.”

He is a firm believer in using social media continuously to get the message across. We must talk about Jerusalem all of the time,” he insisted. “The occupation authorities try constantly to suppress our campaigns and reduce media coverage.” The Palestinians, he added, need to convey what is really happening and so counter the Israeli propaganda.

Many people climb mountains for fame and glory, of course. Palestine Travellers do it to promote their cause, not for individual acclaim. By flying the flag for Palestine, they hope to keep the name and the cause on everyone’s lips, no matter where they are in the world.