The Latin Patriarchate of Jerusalem has two new auxiliary bishops 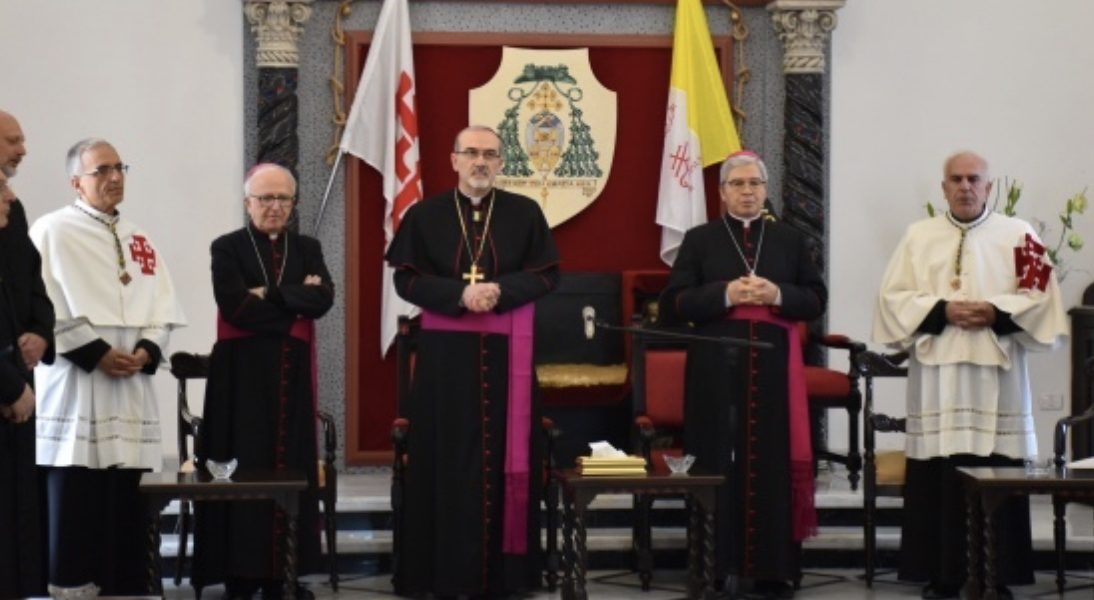 From: The Latin Patriarchate of Jerusalem

Jamal Deibes is the patriarchal vicar for Jordan, while Rafic Nahra is the vicar for Israel. The former directed schools in Palestine, while the Lebanese priest is a great knowledge of the Jewish world. Patriarch Pizzaballa said that their mandate is “to teach, govern and sanctify”.

“With gratitude and joy, I announce to you that the Holy Father, Pope Francis, has designated Fr. Jamal Deibes and Fr. Rafic Nahra as Auxiliary Bishops for the Latin Patriarchate of Jerusalem. Strengthened by the fullness of priestly ministry both Bishops-elect will continue their respective missions as Patriarchal Vicar for the Hashemite Kingdom of Jordan and Patriarchal Vicar for Israel.”

Speaking about them, the patriarch noted that both were “born and raised here in the East, [where they] have exercised priestly ministry for many years and have now been called from the very bosom of the Mother Church to be Successors of the Apostles with the mandate to teach, govern and sanctify the People of God.”

Bishop Rafic Nahra, patriarchal vicar for Israel since 2021, was born on 27 January 1959 in Ismailia, Egypt, to Lebanese parents who had emigrated to that country for work. He grew up in Lebanon. When he was 20, in 1979 he began his studies in Paris, where he graduated in Engineering from the École Nationale des Ponts et Chaussées and practiced his chosen profession for two years.

In 1987, he entered the seminary in Paris, then moved to Rome where he obtained a Bachelor degree in Theology at the Pontifical Gregorian University and subsequently a Licentiate in Sacred Scripture at the Pontifical Biblical Institute.

In 2004 he obtained a Masters in Jewish Thought at the Hebrew University in Jerusalem and subsequently a doctorate in Judeo-Arab literature (2011-2016).

Ordained on 27 June 1992 and incardinated in the Archdiocese of Paris, he held various positions in the French capital before going to the Holy Land as a fidei donum priest and studying highly topical issues such as relations between Christians and Jews, capitalising on the teachings of then Archbishop Cardinal Jean-Marie Lustiger of Paris (Jewish by descent).

Appointed patriarchal vicar in Jordan in July 2021, Bishop Jamal Khader was born on 3 July 1964 in Zababdeh (Palestine). He entered the seminary in Beit Jala after elementary school, and continued his studies until he completed a Bachelor Degree before being his ordination as a priest on 8 July 1988.

He took his first steps as a priest (and teacher) in Jordan before moving to Rome to complete his education earning a doctorate in Dogmatic Theology at Gregorian University in 1998.

Here “earthly Jerusalem and heavenly Jerusalem join in prayer and celebration for these brothers of ours who have been elevated to episcopal dignity,” said Patriarch Pizzaballa. “In the name of the whole Latin Patriarchate, I wish all the best to the bishops-elect and through the intercession of the Holy Virgin Mary, Queen of Palestine, I invoke upon them the blessing of Almighty God.”

Last year, speaking to AsiaNews on Israel’s Remembrance Day, Bishop Rafic Nahra related the tragic consequences of COVID-19 among the survivors of the Shoah, with at least 900 of them dying from the virus.

He noted “how dependent we are on each other”. The Shoah as well as the human and social devastation caused by the pandemic are a warning that invites us to “to look after one’s neighbour and not abandon them at times of difficulty.”