From Jerusalem to Jubeiha: visits of Cardinal Fernando Filoni during his stay in the Holy Land

Bethlehem University / From Jerusalem to Jubeiha: visits of Cardinal Fernando Filoni during his stay in the Holy Land 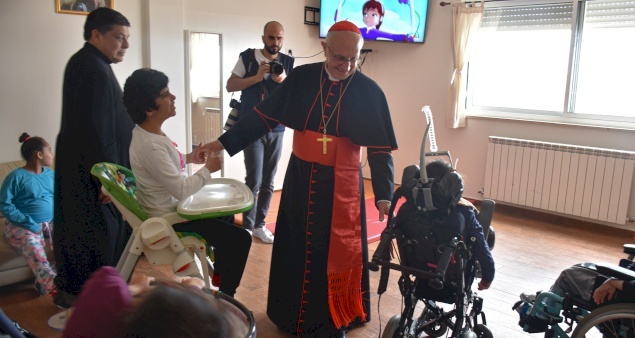 From Jerusalem to Jubeiha: visits of Cardinal Fernando Filoni during his stay in the Holy Land Available in the following languages: Arabic,Español,Français,Italiano

HOLY LAND – Last week, His Eminence Fernando Filoni, Cardinal-Bishop, officially visited the Diocese of Jerusalem for the first time since his appointment as Grand Master of the Order of the Holy Sepulchre of Jerusalem in 2019.

One week to meet the stones, living or architectural, that make up the Church of Jerusalem, mother of all churches. From May 9th to May 14th, Mgr Filoni and his delegation, accompanied by His Beatitude Mgr Pierbattista Pizzaballa, Latin Patriarch of Jerusalem, as well as priests of the Latin Patriarchate, visited the most emblematic places in the Holy Land, not only to celebrate the Eucharist or to pray, but also to get to know the men and women who today make up the Christian community of the land of Christ.

In Jerusalem, the Cardinal first went to Saint Savior and to the Greek Orthodox and Armenian Patriarchates, to meet the heads of the local Churches and the Custos of the Holy Land. Still accompanied by Mgr Pizzaballa, he then made a solemn entry into the Holy Sepulchre, also attended by a delegation of Franciscans, many canons and priests of the Patriarchate, as well as seminarians and knights and dames of the Order of the Holy Sepulchre.

“Here in this holy place, we pray for the Order, for the needs, concerns, and especially the hopes of all its members,” said Mgr Pizzaballa in front of the Tomb of Christ. “And together with the Apostle Peter, we say to you that, even though we have neither silver nor gold, what we have, we give to you” (Acts 3:6).

Then the Cardinal himself spoke, sharing with the faithful the meaning of the word “pilgrimage” here in the Holy Land: “But we, we come here, as Francis of Assisi used to say, to “see and touch” the Lord: to see his footsteps, to hear his words, to touch the place where he was laid, according to the same encouraging words of the angel: “come, see the place where he lay. Then go quickly and tell…: He has been raised from the dead!” (Mt 28:6-7). He is where God saved us!”

In addition to this solemn entry, Mgr Filoni also celebrated several Masses, at the Notre Dame Center, the Holy Sepulcher, as well as the Basilica of the Annunciation in Nazareth. Bethlehem and its surroundings also benefited from his presence, especially the parish and school of Beit Sahour, Bethlehem University, the school of the Franciscan Sisters of Bethlehem, the Hogar Niño Dios center and the patriarchal seminary of Beit Jala. These places are emblematic of Christian action in the Holy Land, but also of the Order of the Holy Sepulchre, which, through its financial support, has contributed significantly to their development.

“If this parish has become what it is today, it is thanks to the precious support of the Order,” explained Fr. Issa Hijazin, parish priest of Beit Sahour. “For example, it is entirely thanks to the Order that we were recently able to renovate the courtyard of our church, and thus provide employment for the many people who came to work on the site.”

After these visits, Mgr Filoni spent the last two days of his stay in Jordan, where he consecrated the church of Jubeiha. Then, to conclude this intense stay in the Holy Land, which allowed him to see the different realities of Christian life in the Holy Land, he went to Mount Nebo, from where Moses is said to have contemplated the Promised Land (Deuteronomy, 34). This is the privilege and duty of every pilgrim to the Holy Land; to strive to gain perspective in order to fully inscribe the Holy Land in the richness of its history.

To see all the photos of Archbishop Filoni’s stay, please click here