Bethlehem University Celebrates the Graduation of its Forty-Sixth Cohort 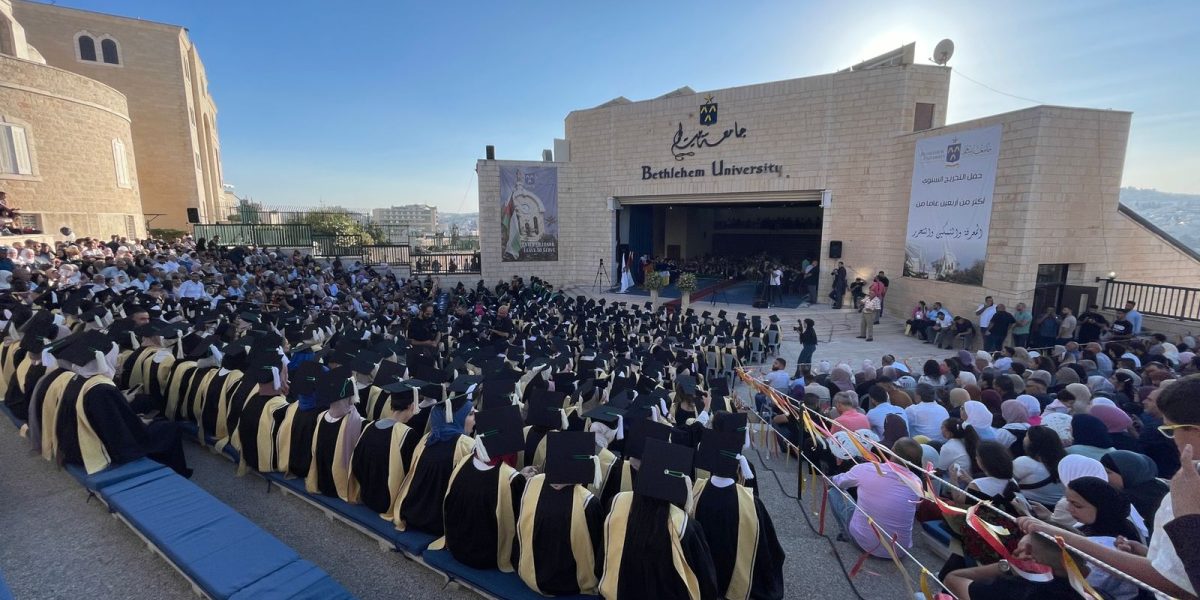 On August Thursday and Friday 18th and 19th, 2022, Bethlehem University celebrated the graduation of its Forty-Sixth cohort which consisted of 641 graduates, holders of master’s and bachelors and diplomas from various faculties and specializations.

The celebration was attended by the Apostolic Nuncio in Jerusalem and Palestine, Mgr Adolfo Tito Yllana, the Chancellor of Bethlehem University, the Minister of Higher Education and Scientific Research Dr. Mahmoud Abu Mowais, the Governor of Bethlehem Major General Kamel Hameid, as well as many heads of institutions, in addition to the families of the graduates and the teaching and administrative staff of the university.

Br. Peter Bray, Vice-Chancellor of the University, who welcomed the audience, congratulated the graduates and pointed out that Bethlehem University has had, during the past fifty years, about 20,000 male and female graduates. “Our university seeks to provide students with certain abilities, professional skills, foreign languages, technological capabilities, and scientific research skills, in addition to personal traits to help them become citizens who care about justice, freedom, and others.”

Dr. Abu Mowais praised the excellent academic performance, telling the student they should be proud carriers of its seal.

He affirmed the Ministry’s continuous support of Bethlehem University in all possible ways to keep its good academic record.

On his part, Governor Hmeid, who was the guest speaker on the first day, said he felt so proud to speak at the graduation of the university he graduated from.  The governor praised the graduates of Bethlehem University, saying wherever excellence at a company, or an institution, or an organization of any kind is present; you find that Bethlehem University graduates are in charge.

At the end of the ceremony, the Chancellor, Vice-Chancellor, and the Vice President for Academic Affairs conferred degrees to graduates, as the Deans called on their names by school.