“Enter to Learn, Leave to Serve” 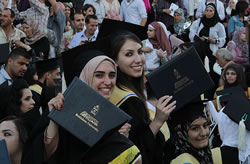 Besides Bethlehem University and Qubeibeh administration and faculty members, the celebration was attended by Mr. Adel Al-Budeiri who gave the award to Falasteen, on behalf of Al-Budeiri family. The award is in honor of the late Mrs. Farida Abu Dayyeh Al-Budeiri, one of Palestine’s first Palestinian pioneer of nursing, famous in the Palestinian nursing world.

The ceremony started with the national anthem followed by speeches by Br. Robert, Ms. Mariam Awad, Mr. Adel Al-Budeiri, and a very meaningful lecture by Br. Peter Iorlano entitled “Enter to Learn, Leave to Serve.” In addition, Br. Robert symbollically gave the Nursing Diploma to a student, Mohammad Houshiyeh, who was detained. It meant so much to that student as he was among the first graduating class of Qubeibeh. Qubeibeh students also had the chance to renew friendships with Br. Robert and Ms. Awad.

Ms. Salam Awad, Qubeibeh program coordinator says “The students are so proud of themselves, and so are we. These students were the timid, shy ones who started with us four years ago. It’s amazing how they developed their personalities, self-confidence, and independence, all traits that we at Bethlehem University try to enhance and reinforce in our students, throughout their years of study, not just getting a degree.”

Qubeibeh nursing students, who train on campus, follow the same curriculum as those on the main Bethlehem campus. Most of the students come from Qubeibeh and the surrounding villages, with the exception of a few who come from Tulkarem, Jenin and Nablus, and one from Ramallah.