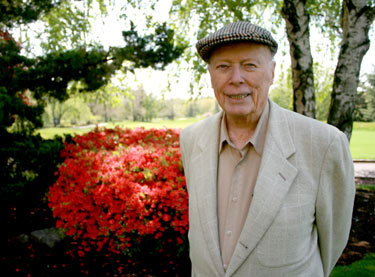 Today it is with great sadness that we learned of the death of Mr. George Doty, who passed away on 24 April 2012. Mr. Doty was a longtime friend and dedicated supporter of Bethlehem University. He was pre-deceased by his wife, Marie. His son William has been a longtime member of the Bethlehem University Foundation Board of Directors.

As a Knight of the Equestrian Order of the Holy Sepulchre of Jerusalem and through his involvement with the Catholic Near East Welfare Association (CNEWA), Mr. Doty and his family worked tirelessly to support a host of initiatives throughout the Holy Land. At Bethlehem University, his generosity provided critical funding for scholarships, capacity building, and student career development, forever changing the opportunities available to our faculty, staff, students, and alumni.

In addition to his support of Bethlehem University, Mr. Doty and his family gave generously to strengthen Christian institutions in Bethlehem, Jerusalem, Beit Jala, Ramallah, Gaza City and throughout the Holy Land.

For the obituary from the Catholic Near East Welfare Association, click here.