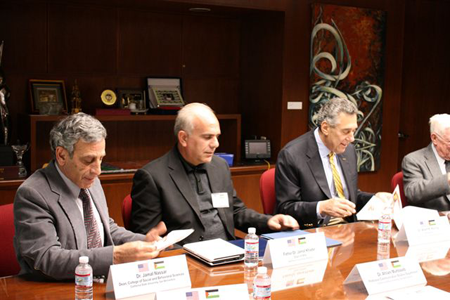 San Bernardino, California – On April 11th, Fr. Jamal Khader visited the University of California, San Bernardino, where he met with USCSB President Karnig, Dean Nassar, and other university officials to renew the Memorandum of Understanding between Bethlehem University and CSUSB. Father Khader also spoke at two public events. Also present was Sir Chuck Radloff, a supporter of Bethlehem University, especially the Sir John McGuckin Internship and Mentoring Program, having been host to delighted Bethlehem University student interns. Father Jamal is enthusiastic about the latest developments. “We are actually at the stage where we can implement projects and cooperative ventures, which is very exciting.”

On Wednesday April 11, 2012, Fr. Jamal joined a team of experts that included Dr. Qustandi Shomali, who is a visiting Bethlehem University scholar, now settled in at CSUSB. Fr. Jamal participated in Palestine Awareness Week, where he spoke about the status of Palestinians, sharing the trials daily faced by Palestinians in the Occupied Territories, highlighting continued settlement construction and a separation wall that are derailing any peace talks.

On Thursday, April 12, Fr. Khader spoke to an audience of over 200 on Christians Under Israeli Occupation. Father Jamal emphasized the unity of Christians and Muslims in their struggle against a long term occupation that aims to deprive them of their national independence.

He said: “We share the same culture, the same history, the same language and the same struggle for freedom. We all live under Israeli military occupation since 1967, and we were displaced from our country since 1948. The Arab Israeli war in 1948 is our Catastrophe; 730.000 Palestinians, including the 80% of the Christian population, were forced to leave their native Palestine to become refugees.” He concluded his presentation with a commitment to justice arguing that “religion cannot favor or support any unjust political regime, but must rather promote justice, truth and human dignity.”

Fr. Jamal is Dean of the Faculty of Arts and Chairperson of Religious Studies at Bethlehem University, where he also teaches Peace Studies and Conflict Resolution Strategies for the Master’s in International Cooperation and Development (MICAD) program at Bethlehem University. Fr. Jamal also teaches at the Latin Seminary in Beit Jala, the Emmaus Center in Beit Sahour, the Family Center in Bethlehem, and Mar (Saint) Elias College in Ibillin. Fr. Jamal is one of the founders of the Kairos Document and has worked extensively on interreligious relations, including organizing international conferences on interreligious relations, the latest being entitled ‘Violence, Non-Violence, and Religion,’ held at Bethlehem University. Read the proceedings here, which include works of world famous scholars and public figures.