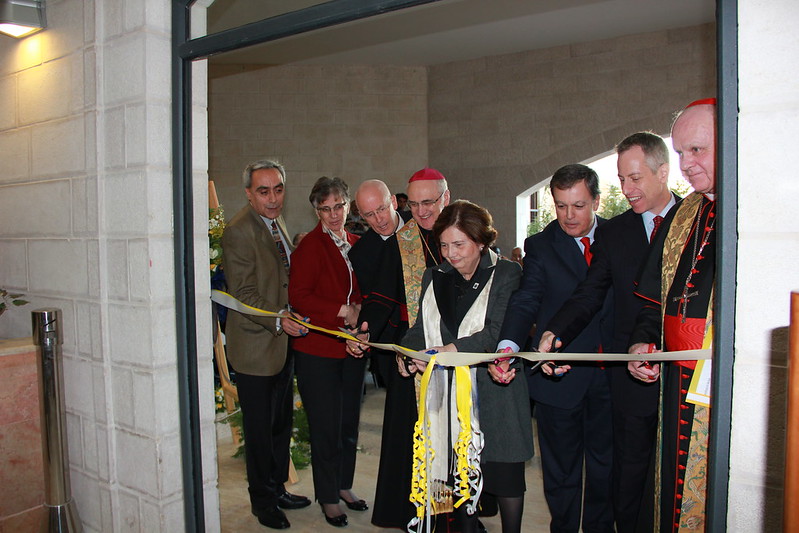 Improving of the Quality of Education in Palestine

“We are determined to support Bethlehem University’s initiative to train teachers to improve the quality of education in the Palestinian Territories, because I am convinced that education is the lever of development,” proclaimed Madame Pilar Lara Alen, President of Fundación Promoción Social de la Cultura (FPSC), at the 28 November 2012 dedication of the new Education Building at Bethlehem University. (List of Speakers)

With gifts of more than $4.5 million,  (click here for the list of donors) the new Education Building and educational outreach program is serving thousands of teachers and students in the Jerusalem, Bethlehem, and Hebron region.

“We are most appreciative of the vision and commitment of a number of generous benefactors from the Catholic Church, international governments, NGOs, and private donors in Germany, Spain, Switzerland, United Arab Emirates, the United Kingdom and the United States of America who have been led by Madame Pilar Lara Alen, President of the Spanish Foundation for the Social Promotion of Culture, to make this day possible,” said Brother Peter Bray, Vice Chancellor of Bethlehem University.

Brother Peter noted that “while we gather in Bethlehem on this joyous occasion to dedicate the construction of this new educational facility, we also unite ourselves in prayer with the more than 435 former students and graduates of Bethlehem University from Gaza who struggle with the recent destruction of many of their homes and the loss of many of their beloved.”

“Jesus said, ‘Go and teach the world’ and I think the Lasallian Christian Brothers and their colleagues well-embody these words of our Lord here in Palestine and throughout the world,” reflected His Eminence Edwin Fredrick Cardinal O’Brien, Grand Master of the Equestrian Order of the Holy Sepulcher of Jerusalem. The German Lieutenancy and the Grand Magesterium of the Equestrian Order, together with the Catholic Archdiocese of Cologne in Germany, were among the lead benefactors who made this building and educational project possible.

Mr. Michael Ratney, US Consul General, expressed his admiration of the quality education evident at Bethlehem University and spoke of the long-standing commitment of the American people and government through a variety of programs of USAID to support the Palestinian educational sector.

Mr. Alfonso Portabales, Spanish Consul General, spoke of the honor the Ministry of Foreign Affairs, the Agencia Española de Cooperación International Para El Desarrollo (AECID), and the Municipality of Madrid had in partnering with others from around the world in supporting this most significant educational project in Palestine.

“We are highly appreciative of the effort invested by the Faculty of Education at Bethlehem University into this project.” said Mr. Sami Maroua, Head of Bethlehem Directorate of the Palestinian Ministry of Education. (Summary of the Project)

Bethlehem University, the first university founded in Palestine, is a Catholic co-educational institution whose mission is to provide quality higher education to the people of Palestine and to serve them in its role as a center for the advancement, sharing and use of knowledge.

As part of its on-going efforts to meet the educational needs of the Palestinian society, new undergraduate majors, master degree programs, and professional diplomas have been introduced at Bethlehem University during the past 10 years that have resulted in a 45% increase in enrollment. To house these new academic programs, research and community outreach activities, and especially to accommodate the new multi-million dollar Faculty of Education project designed to Improve Education in Palestine, Bethlehem University successfully secured funding to construct the new building primarily for the use of the Faculty of Education.

While the first educational outreach project supported by FPSC from 2007-2010 focused on 15 schools, this new and expanded project from 2010-2014 involves 118 schools in the middle and southern West Bank: 58 of which are direct partners and an additional 60 which are indirect beneficiaries. The schools involved represent the private (including Catholic and Christian), UNRWA, and public government sectors. Upwards of 22,000 students and 1,100 teachers as well as 5,000 parents and 180 Bethlehem University students in training to be teachers are beneficiaries of this new four-year program.