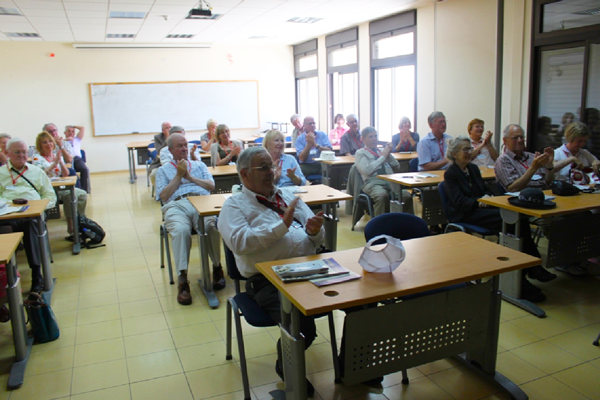 Knights and Dames of the Lieutenancy of England and Wales of the Knights of the Holy Sepulchre of Jerusalem visited on Friday, May 2nd, 2014 the Institute for Community Partnership (ICP) at Bethlehem University (BU) to look closely at the main contents and objectives of the “OliveAid Project”. Accompanying his Excellency David Smith were other Knights, including Rev. Canon Jim Pannett, the Spiritual Director, and many couples in the region on a memorable spiritual journey.

Mr. Moussa Rabadi, the Director of ICP, was pleased to focus on the role of the ICP through his welcoming words to the visitors, and pointed out to the major approaches of the institute in bridging the gap between the university and the community, a major enhancement of the community-service extension of BU. Further, Mrs.  Nisreen Khalilieh delivered a PowerPoint presentation which highlighted the progress in the “OliveAid Project”, future challenges, roots of problems and the massive need to extend the circle of partners and supporters to bring more tangible and realistic achievements to this important project.

The group was welcomed by Mr. Moussa Rabadi the Director of ICP who explained the role of the ICP as an extended arm of Bethlehem University, and then the group was taken through a power point presentation by Nisreen Khalilieh which illustrated the development of the OliveAid Project and detailed the reality of the problems faced, the partnerships created, the achievements, the challenges and future prospects.

Bethlehem University and the Institute for Community Partnership gratefully acknowledge the support given to Bethlehem by OliveAid Project and the many donors who have responded  both in the provision of Olive Trees and through its Scholarship Fund. The visit was a good opportunity to acknowledge and thank Rev Canon Jim Pannett for his generous and continuous support for Bethlehem University and the OliveAid Project, and it is worthwhile mentioning that the first location of the OliveAid Project was planted with donations received from Canon Jim and his Parish of St. John the Baptist in Purley in the Diocese of Southwark in England.

Later, the group was guided to a close visit to one of the olives groves (# OA053)  in Beit Sahour,  to become more familiarized with the project’s activities.  Mr. Wael Bulos and his daughter, the owner of the grove,  enjoyed an interactive discussion with their guests.  It was obvious that the project has yielded positive impacts on the livelihoods of the beneficiaries especially on the long term.

Since the launch of OliveAid in November 2008, 5145 Olive trees have been planted in 94 different locations, which required 1,800 working days to accomplish.   Two OliveAid supported students have graduated from the University and three new scholarships have been funded.To date twelve groups have visited the ICP and the groves of the project, and more would be warmly welcomed.