Colloquium in memory of Stephen Hawking 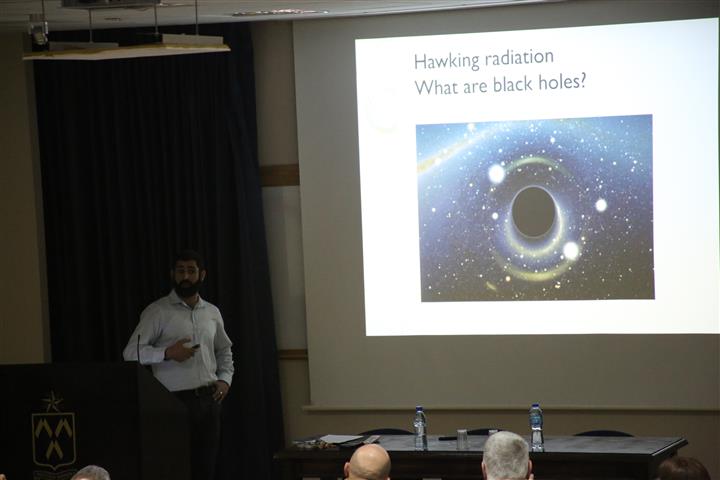 On the 3rd of April, 2018, the Faculty of Science held a colloquium in memory of the great Stephen Hawking. The Furno Hall was full of eager students and dedicated professors and staff, participating in this event; the keynote speakers were Dr. Nidal Haddad, Assistant Professor at the Department of Physics and Dr. Walid Shomaly, Professor of Chemistry at Bethlehem University. On one hand, Dr. Haddad spoke on the main contribution of Hawking to physics, especially his theory about the black holes, their formation, and evaporation and about the death of stars.  On the other hand, Dr. Shomaly spoke mainly about Hawking’s political and religious beliefs and especially his political stance regarding the Palestinian issue.

Hawking believed in the Palestinian cause; he despised the fact that some people use religion as a political instrument.  Hawking stood side by side with the Palestinians, as he gave a lecture at Birzeit University in 2006. Moreover, he once refused to accept an Israeli award, because it simply goes against what he strongly believed in.

Following the introductions, a session of questions and answers was held. The crowd was interactive; the students were keenly asking questions and the professors provided positive commentary.

Prominent American astronomer, Carl Sagan once said “the cosmos is within us. We are made of star-dust”; the greatest testimony to this quote is Stephen Hawking.  Hawking was indeed a bright star in this gloomy world; he is made of magical stardust, raw willpower, and immense passion. He was able to stand against all odds and fight his neurological disease and live for forty-nine years longer than his physicians originally anticipated. Although Hawking lost his ability to speak, it did not stop him from communicating with the world.