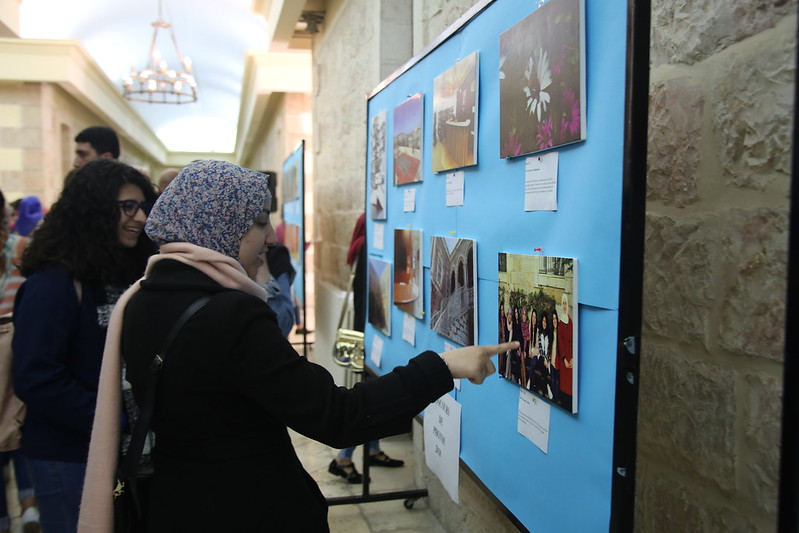 The Representative of Switzerland in Palestine, Mr. Julien Thöni, and the French Consulate’s Educational Cooperation Attaché in Jerusalem, Ms. Marie-Claude Messager, attended the opening ceremony of the exhibit. Faculty, staff and students of Bethlehem University in addition to local photography professionals were also present.

In her opening remarks, the Dean of the Faculty of Arts and the Chairperson of the English Department, Ms. Hanadi Soudah-Younan, welcomed the guests and gave a briefing on the activities undertaken by the English Department. The activities which started on the Francophonie week and lasted about a month included; French movie day, French storytelling, Fete de la Crepe and this photography competition which was concluded by the exhibit. She elaborated that the department aims to merge the academic with the extra-curricular including the creative, the cultural, and the artistic to help students gain the knowledge, the skills and the attitudes detailed in the Graduate Attributes.

Ms. Younan thanked all those who were involved in the preparation and the execution of the all the activities; the teachers in the French program, Ms. Sylvia Mukarker and Ms. Fatima Askar, The English Department Secretary, Ms. Christina Qamar-Daoud; The Hotel Management Director, Mr. Nabil El-Mufdi and his faculty and staff for their work on the Francophonie activities. Also, she thanked Mr. Jimmy Michael, Ms. Sabrina Mukarker-Zeidan, and Ms. Jenny Baboun-Hodali for their evaluation of the photographs.

The Executive Vice President, Dr. Michael Sansour, said that one of Bethlehem University’s traditions and history was its connection to the French language since the founder of the Lasallian brothers is Saint Jean Baptiste de la Salle. He added that the French language and culture are regaining their former glory as more than 270 million speak French today.

He continued that consolidating foreign languages especially English and French and their respective cultures is in accord with Bethlehem University’s current and future strategic plan.

The day concluded with a lunch for the French representatives from Switzerland, and France who were joined by the members of the evaluation committee, and from the administration, Dr. Sansur, Dr. Hazou, and Br. Denis; and members from the English department.

The Photography Exhibit will be on display in Millennium Hall for two weeks.