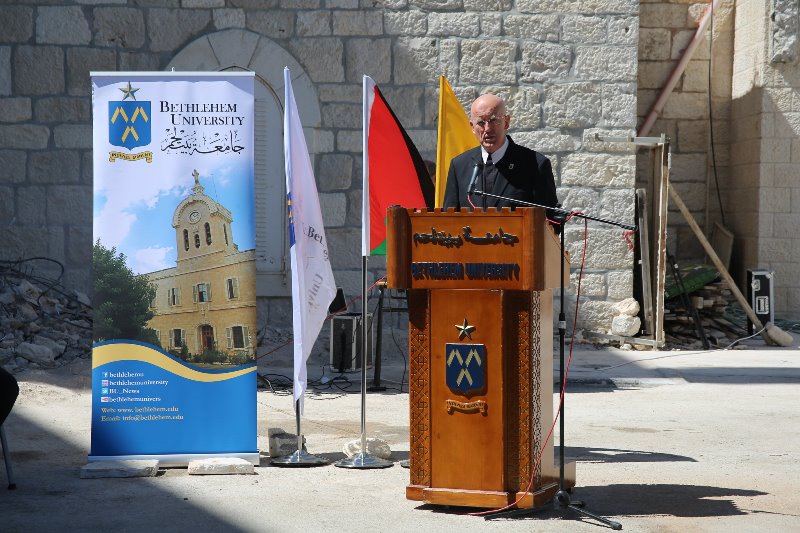 Lady Valencia Camp, Lieutenant of the Middle Atlantic Lieutenancy of the Equestrian Order of the Holy Sepulchre of Jerusalem, expressed her happiness to be at Bethlehem University especially to see the launching of this project.

Mrs. Mariam Awad, Dean of the Tarek Juffali Faculty of Nursing and Health Sciences, described the facilities that will benefit the students and the University in general. The new building will house additional classrooms and a simulation lab which will enable students to train on computerized dolls. The lab carries the name of the Palestinian businessman, Mr. Samir Aweidah, who contributed greatly to the establishment of this unique laboratory in Palestine.

Mrs. Awad added that the university recently obtained a license from the Ministry of Health to open a physiotherapy clinic at the University to benefit the local community at reasonable prices.

His Excellency Archbishop Leopoldo Girelli, Apostolic Delegate to Jerusalem and Palestine, and Chancellor of Bethlehem University recited a prayer on the foundation stones to bless the new building.

The building is to be named in honor of His Eminence John Patrick Cardinal Foley, the late Grand Master of the Equestrian Order of the Holy Sepulchre, who was a great friend of Bethlehem University. The Middle Atlantic Lieutenancy directed a gift of $1,500,000 towards this project. The funds were a bequest to the Lieutenancy from the estate of Lady Rose Bente Lee Ostapenko, who was a faithful member of the Order. Her legacy of supporting the people of the Holy Land continues with the constriction of this building. That single donation began the fundraising for the project. The University has raised $ 3.7 million out of the $ 4.5 million total cost of the project.