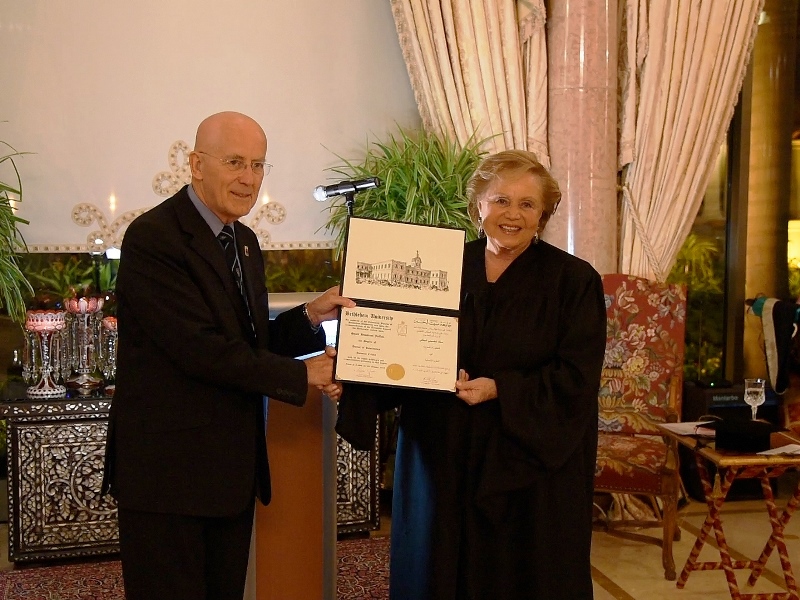 As a tribute to her contribution to education, civic services, and philanthropic activities, Bethlehem University presented Mrs. Suad Husseini Juffali with an honorary doctorate in Jeddah, Kingdom of Saudi Arabia, on 30th October 2018.

Bethlehem University recognized Mrs. Juffali for her longstanding and steadfast support of the University’s educational mission and disabled students with financial needs.

Vice Chancellor Brother Peter Bray presided over the award presentation of the University’s highest honor, the Doctor of Humanities, honoris causa, to Mrs. Juffali in a special ceremony at her private residence in Jeddah.

Brother Peter was pleased to have the opportunity to finally confer this recognition upon Mrs. Juffali and be among her friends for the occasion.

“I believe in the young generation. Youth that are empowered with knowledge are the most influential strategic resource in any nation.”

Mrs. Juffali encourages the support of young people by giving them the best education and training they deserve.

His Excellency, the Consul General of the State of Palestine in Jeddah, Mr. Mahmoud Al-Asadai, said that Palestine is always in need of friends like Mrs. Juffali.

Mrs. Suad Husseini Juffali was born in Jerusalem to the prominent Jerusalemite Al-Husseini Family. She received her primary education at the St. Joseph School in Jaffa, Palestine, but like many was forced to flee Palestine to Lebanon in 1948.

She completed her Bachelor’s Degree in 1954 at the Beirut College for Women, now known as the Lebanese American University in Beirut.

She married her late husband, Sheikh Ahmed Juffali, a passionate entrepreneur who played a major role in the development of the energy sector in the Kingdom of Saudi Arabia.

She demonstrated an outstanding sense of civic responsibility by establishing and organizing the first Women’s Welfare Society in Saudi Arabia in 1956, and later on, the Faisaliyah Women’s Society.

Over the years, she supported Al-Makassed Hospital in Jerusalem and enabled it to continue to serve the Palestinian people.

At Bethlehem University, Mrs. Juffali set up an endowed scholarship and an annual scholarship fund for disabled students. Her generous contribution towards the “Tarek Juffali Faculty of Nursing and Health Sciences” will enable Bethlehem University to offer first class education to nurses of Palestine for the foreseeable future.