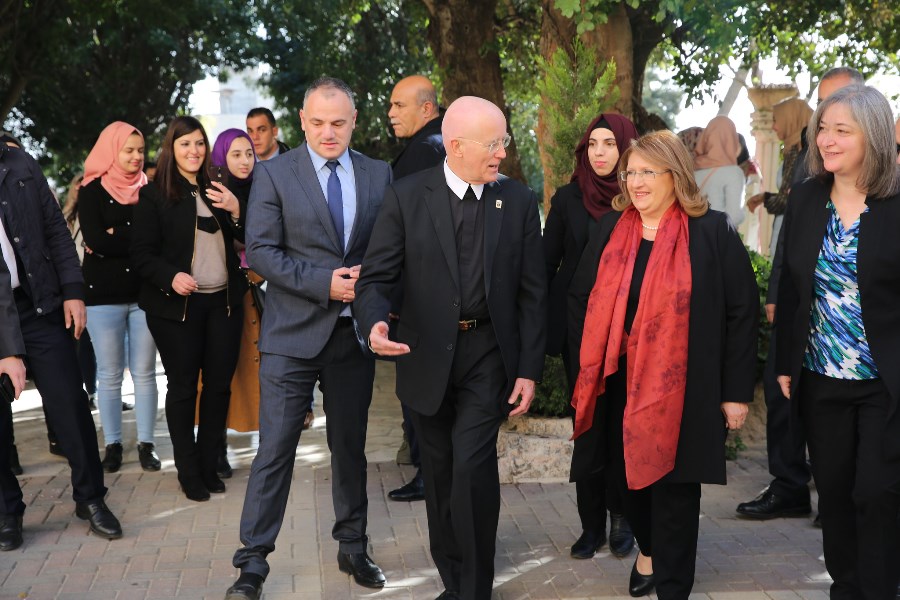 Brother Peter thanked Malta’s President for her visit as it “helps to keep hope alive here at the University and shows our students that people are standing in solidarity with them.”

Brother Peter praised the good relations between Bethlehem University and the Republic of Malta, especially the academic cooperation, and expressed his hopes to develop this relationship in the near future.

President Coleiro Preca said that the people of Malta view with utmost importance the suffering of the Palestinian people.

“Our visit today to Bethlehem University is to emphasize our long-established relation with the Palestinian people who we believe have the right to self-determination and fundamental human rights.”

She gave a lecture entitled “Tourism for Peace” in which she explained that tourism can open a wide area of rapprochement between people especially in Bethlehem. It should be noted that she has been appointed by the United Nations World Tourism Organization as a Special Ambassador for Sustainable Tourism.

After the lecture and on behalf of Bethlehem University, Brother Peter presented a gift to the visiting President as a souvenir. She then had a tour on campus passing by the Institute of Hotel Management and Tourism and the Clinical Simulation Center of the Faculty of Nursing.

The President was accompanied by Deputy Prime Minister and Minister for Health Christopher Fearne, Minister for the Environment, Sustainable Development and Climate Change José Herrera, Parliamentary Secretary for Local Government and Communities Silvio Parnis, and representative of Malta to Palestine Reuben Gauci.