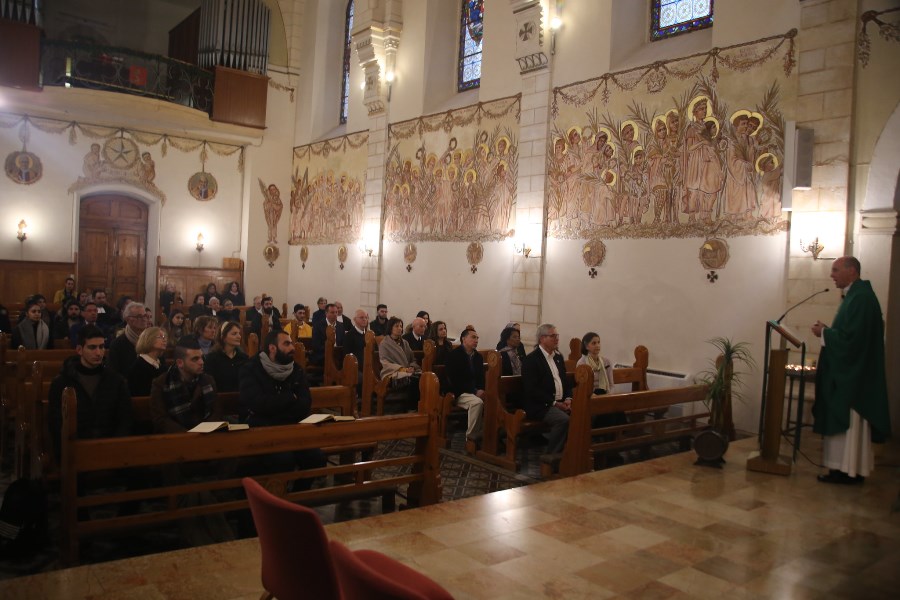 Led by John Schlageter, the Foundation’s Executive Director, the pilgrimage was directed by Monsignor Walter R. Rossi, Rector of the Basilica of the National Shrine of the Immaculate Conception in Washington, DC, and member of the Board of Directors of the Foundation.

Among the group were Her Excellency Valencia Camp, DGCHS (Lieutenant of the Middle Atlantic Lieutenancy of the Equestrian Order of the Holy Sepulchre of Jerusalem), Patrons Joe (member of the Board of Directors) and Mary Clare Starshak, and Patron Suava Salameh (member of the International Board of Regents of Bethlehem University).

The group was accompanied by Her Excellency Michele Bowe, President of the Holy Family Hospital of Bethlehem Foundation and Ambassador of the Sovereign Military Order of Malta to Palestine.

Monsignor Rossi presided over Mass that was celebrated with the faculty, staff, and students of Bethlehem University in the Chapel of the Divine Child.

The generous group then enjoyed lunch in the Institute of Hotel Management training restaurant where food was cooked and served by students. Student ambassadors were able to share some of their experiences with their guests during lunch and afterwards in a discussion session.

John Schlageter, Suava Salameh, and Valencia Camp visited campus prior to the pilgrimage and toured the future site of Cardinal Foley Hall and the Library. The Middle Atlantic Lieutenancy contributed 1.5 million dollars for the construction of Foley Hall. Once completed, Cardinal Foley Hall will house the Faculty (School) of Nursing and Health Sciences at Bethlehem University. The Library will be named in honor of Suava Salameh’s parents during a dedication ceremony scheduled for the Spring of 2020.

The Patrons are individuals or couples who make a qualifying gift to the Patrons Endowment. By their generosity, the members of this giving society invest themselves into the work of the Foundation in its sole mission of supporting and promoting Bethlehem University.