FEATURE: Against all Odds 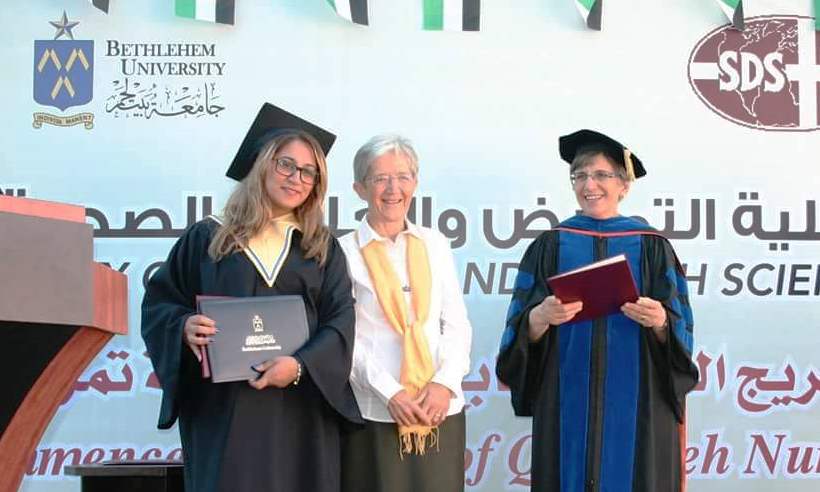 After high school, I was at a crossroads: to get married or continue my education. These were the options my father gave me. I chose married life.

A few months after my marriage, I got pregnant with triplets: two boys and a girl. However, I got divorced soon after I gave birth. I had to raise my children on my own. I needed a source of income.

I did a short physiotherapy course and started working as an assistant nurse at a hospital while my triplets were at a nursery. I was rejected by Al-Makassed Hospital nursing program because I was already working, and they only took students fresh out of high school.

A year later, I approached Bethlehem University to study nursing. They were reluctant to accept me, but the dean at the time was eager to give me a chance. I was then directed to the Qubeibeh Nursing Program. I enrolled without knowing where Qubeibeh was even located.

For the first two years, I was working night shifts at a hospital in Jerusalem. This allowed me to take day classes. It was not easy, but my determination to succeed outweighed the exhaustion.

My third year at the University was less tiring but equally loaded. I was given an administrative position at the hospital. It was set to close down due to issues of substandard care but was given a few weeks for potential redemption.

The Israeli Ministry of Health granted them permission to continue with 50 patients until the ministry was able to reassess the quality of care at the hospital. I worked very hard and in 6 months the hospital was allowed to care for 75 patients.

After this success, I was granted flexible working hours which enabled me to meet my study requirements. I was also helped in covering my university fees until I graduated.

After graduating, I was promoted to Head Manager of the hospital which is now operating at full capacity. I was also approached by Bethlehem University to join as a Nursing Clinical Instructor, which I have accepted with aims to transfer my knowledge and experience to my students and future colleagues.

This success story showcases women’s empowerment and the chance given to Rula to realize her potential. Thanks to this opportunity, Rula has a successful career of helping others in addition to being a loving single mother.