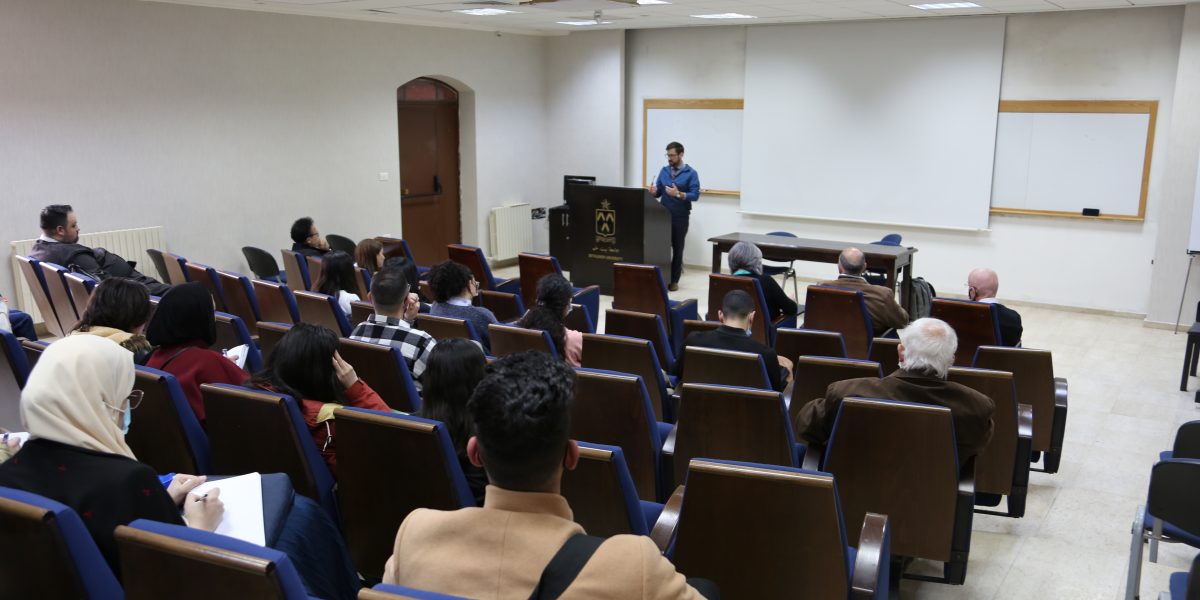 The Office of the Dean of Research (DOR) organized a lecture titled, “Higher Education Systems in Settler Colonial Contexts,” the eleventh of the Bethlehem University Research Group series for the 2021-2022 academic year, on Wednesday March 9.

Mr. Ben Norquist, a Ph.D. candidate at Azusa Pacific University, presented an overview of his study, which focuses on higher education in the city of Bethlehem at systemic and individual levels in the context of settler-colonial policies and infrastructures that govern use of space.

In his research, Mr. Norquist collected stories from faculty, administrators, and students related to faculty perceptions of student learning, the physical features of learning environments, and adaptive structures and activities of educators and learners. perception of space. He examines these issues in the context of the tactics of transfer that settler-colonial entities deploy to displace native populations and to emplace colonial populations.

Mr. Norquist also explores the implications of theories of the first, second, and third universities to sort out various energies in the higher education system between those that promote neoliberalism and connection to global capitalism, those that promote a vision for critical education, and those that seek to construct decolonizing assemblages.

Faculty and students from various disciplines across the university attended the webinar. In the discussion, Mr. Norquest responded to many questions and comments from faculty and students who were interested in the findings of this study and its implications on their lives, in particular, and Palestinian education in general.

Br. Dr. Alejandro González Cerna, Associate Professor and Dean of Education, was interested in Mr. Norquist’s approach and the way in which his findings “might help us gain a more advanced awareness of our mission and methods as a University in the West Bank and in service of the Palestinian People.” Mr. Layth Awad, an Instructor in the English Department, said his students in the poetry class were particularly impressed with the emphasis Mr. Norquest placed on narrative and Mahmoud Darwish’s poetry that helped him get a deeper perspective about the Palestinian experience. The lecture also illuminated to them the power that “poetry can have on people, and how it can shift their core views on many social, political, and cultural issues.”

Students were also engaged in the discussion. Amer Abu Zayad, an English major, appreciated the way Mr. Norquest talked about the role teachers should play in enhancing their sense of belonging and identity as well as the importance of high-quality education in “changing the perception of the Palestinians in the eyes of Westerners.” Shaimah Odeh, an English major, also thought that changing perceptions about Palestinians in the West, especially among religious communities, “should be an important part of our education.”