Presentation of the Gold Cross of Merit to Mr. Jeries K. Handal for his support to the Holy Land 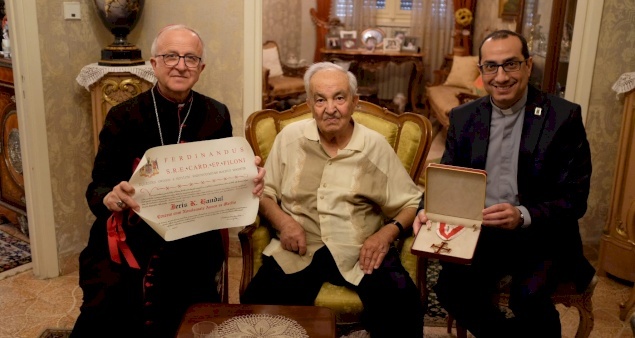 Presentation of the Gold Cross of Merit to Mr. Jeries K. Handal for his support to the Holy Land Available in the following languages:

BETHLEEM – On Monday, April 25, 2022, Mgr William Shomali, Patriarchal Vicar for Jerusalem and Palestine, presented the Gold Cross of Merit to Mr. Jeries K. Handal, a Palestinian pharmacist and entrepreneur from Bethlehem, to thank him for his commitment and support for the Holy Land, and especially for education in Palestine. The initiative of decorating him came from the Lieutenancy of Montreal, where Mr. Handal lived for some years.

Born in the birthplace of Christ in 1928, into one of the oldest Latin Catholic families of the city, Mr. Handal is the youngest of twelve siblings. He lost his father at a very young age but, although his brothers and sisters had to give school up to work, he was fortunate enough to attend and graduate from the Terra Sancta School in Bethlehem, and then to enter Al Nahda College in Jerusalem, which was very famous at the time.

In 1949, he went to Egypt to study chemistry and pharmaceutical sciences at Cairo University. He returned to Bethlehem in 1955 and established his own pharmacy in the heart of the old city, not far from the Basilica of the Nativity. At the same time, he was involved in several other commercial ventures.

Thirty-five years later, now retired, Mr. Handal decided to give back to his community what he had received in life. Among other charitable ventures, funded solely by his private assets, he thus funded a scholarship program at Bethlehem University. Since 2007, significant sums were donated to help educate Palestinian youth. Mr. Handal has also supported the city’s main retirement home, donating the construction of a new wing to meet the increasing need for geriatric care.

Entrusted by the Grand Magisterium of the Order to the Latin Patriarchate, the cross was presented to Mr. Handal during a moving ceremony that took place in his home in Bethlehem, in the presence of Fr. Iyad Twal, Executive Vice President at Bethlehem University, Mr. Najib Nasser, president of the Antonian society, as well as Mr. Handal’s wife, his son Mr. Khalil Handal, and his daughter, Mrs. Ibtissam Handal, who came with her husband, Mr. Gabi Rahil.

Established by Pope Pius XII in 1949, and divided into three classes, this award is intended to reward people who are not necessarily members of the Order of the Holy Sepulchre but who have actively contributed to supporting the Holy Land. It takes the form of a Greek cross resting on a crown of thorns and attached to a ribbon.