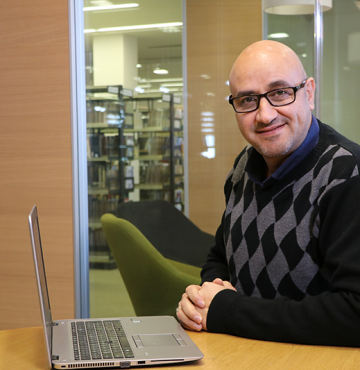 Born in Beit Sahour, a Graduate of Birzeit University with a BA degree in English Language and Literature and a Diploma in Translation.

Deeply involved in the Palestinian nonviolent peace movement since 1991 soon after joining The Palestinian Centre for Rapprochement between People, (PCR), with previous involvement since 1987 with the beginning of the first intifada, and became its Executive Director in 2005 until this moment on a part-time basis.

Co-founder of the International Solidarity Movement (ISM), a nonviolent movement that works in Palestine with a goal to promote and support the nonviolent Palestinian resistance movement. (www.palsolidarity.org)

Co-Founder and Steering Committee member of the Nonviolence Network in Arab Countries.

Experienced in coordinating mass activities and has undertaken a number of speaking tours in Europe, the USA, and Canada covering the Palestinian issue and the nonviolent popular struggle in Palestine. He currently serves as the Communications Officer at Bethlehem University.