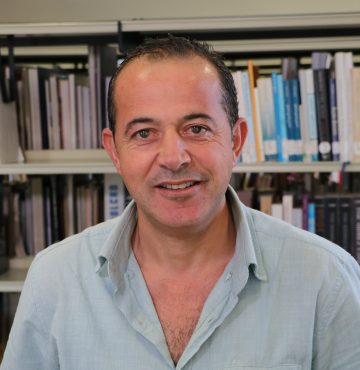 Born in Nablus in 1973, and moved between a number of Palestinian cities.

PhD holder in Moral, Critical and Cultural Discourse at the University of Cairo, Egypt.

Participated in many scientific, cultural, and social conventions. As well as participating in local and international conventions in the area of literary, cultural, critical and informative discourse.

As well as having studies in Cartoon, the most important one is for the Artist Naji Al Ali.

Participated in many cultural and social seminars on the issue of religious tolerance.

Worked as a literature and media lecturer for several educational organizations and universities, including Al Najah National University and Bethlehem University.

Taught in different areas and courses of literature and Arabic culture and media, such as: “the Language of Media,” and “the Making of Discourse and Movies” As well as presenting awards in literature, such as the Bethlehem University award in literature.

Believes in intercultural dialogue and tolerance, as well as the renewal of political and religious discourse for long-term relationships and a vast universe.