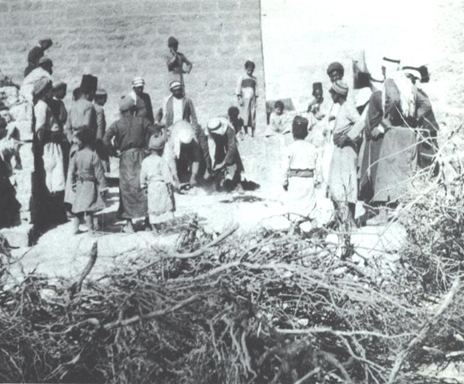 From the moment of birth, parents began to consider future marriage for their children. One of the reasons for this early matchmaking was the preference for marriage of the same village and the same kin group. Marriage was an important social and economic alliance between two families.

A bride and her bridegroom had little to do with their parents’ choice. If they belonged to the same family, or were neighbours, they would have known each other as children; otherwise they might be complete strangers.

Wedding Seasons:  the most favourable times were during the Great Feast after Ramadan, in May and June, when the harvest was finished, and during the full moon in October and November when dancing could continue far into the night.  People didn’t marry during the month of Ramadan, during bad weather or when there were short food supplies. Weddings were rarely held during the harvest or winter months.

Women going to the bride’s house

Choosing a bride:  Because of a father’s authority over his family, his children respected his choice. Important factors were family connections, social and economic considerations, character, health and beauty.  The ideal marriage for a son was with his cousin (bint al-‘amm).

Child marriage:  There was a custom whereby a father might obtain a bride for his son at the time of her birth. It took place when a man congratulated another of the birth of a daughter by saying: “ Blessed is the bride” and the father’s girl answered “she is for you”.  If this was accepted, the baby girl was betrothed to the man’s son.

The hand of the Bride:  When it had been decided that a man would marry and a bride had been chosen, there was a formal request for the bride. A friend or relative of the groom went to the bride’s family asking for her hand.

Betrothal Feast:  It came in a formal announcement to the village that the couple would be wed.  Animals were slaughtered and a meal of meat and rice, followed by coffee and tobacco, was prepared by the groom’s male relatives.  The women gathered to rejoice in the house of the bride. If the bride was from another village, the feast was more elaborate. The friends and family walked to the other village, singing and dancing along the way. The groom’s family brought food and cooking fuel and prepared meal at the house of the bride.

Bride Price: There was negotiation of the bride price given by the groom to her father. The payment could be given partly or totally to the bride herself. It was often used to obtain a wife for her brother.  The highest price was paid for a virgin bride and half that sum for a widow or divorcee.  An expensive bride was a source of pride and respect for her husband.

Wedding Preparations:  During the week preceding the wedding there were long evenings of singing, dancing and feasting by the groom, his family and guests.  At this time the groom purchased the wedding outfit for his bride. The royal dress (malake) and the jacket (taqsire) were the most important items in the bridal trousseau. The fame of Bethlehem couching spread all over southern Palestine, and every bridegroom who could afford it was expected to buy a Bethlehem dress.

Evening of Henna: The last evening before the wedding day all attention was focused on the bride. The female relatives of the groom went to her house to decorate her hands and feet with henna. Other women, children and young men came to stain themselves with henna. The party was expected to weep at the thought of the bride leaving her father’s house.

Wedding day: On the day of the wedding the mothers and sisters bathed her. The groom was prepared in the same way and dressed up by his family.  For a virgin bride, a camel was prepared to take her from her father’s house to the house of her husband. The camel was piled with rugs, cushions and decorated with sprigs of citron for good luck and blessings.

Bridal Procession:  The procession to bring a bride from another village was an exciting event and an expression of village pride. Along the way, the women sang and clapped and uttered their shrill trills of joys (zagharit). From time to time the procession stopped while the men raced their horses and performed the sword dance. Special songs were sung.

Dressing the Bride:  When the bride reached the village, she was greeted with songs and trills. The groom and his family waited for her in front of their house. The bridal couple’s first entrance into the bride’s new home was an act of great significance.  The groom carried a green branch for prosperity and invoked the name of God. The bride was handed a piece of sour dough, a fertility symbol, which she stuck to the lintel of the door. The groom slapped her hand three times, as they crossed the threshold, as a sign of his demand for respect.

Wedding Feast: The groom leaves the house to help the men in his family entertain the male guests at the wedding feast.  One man was chosen for the honour of cooking the meal for the bridal pair. When the men had finished eating, the remainder of the food was brought to the women who had stayed with the bride. After the feast, money was collected from the guests to help the bridegroom meet the great expenses of the occasion.

Text and photos:  Karen Seger (ed.) Portrait of a Palestinian Village: The Photographs of Hilma Granqvist. The Third World Center for Research and Publishing, London,1981. Pp.74-78