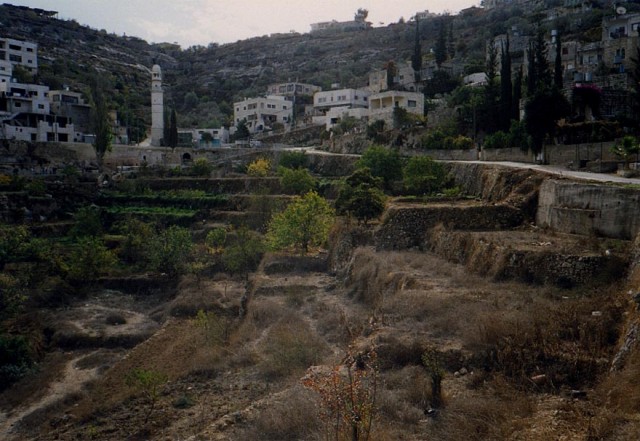 Battir is a Palestinian village south west of Jerusalem. It is surrounded by traditionally irrigated, beautiful terraces, filled with eggplants, peppers and olive trees. Some decades ago, the train to Jerusalem used to stop in Battir; next to the railway are the unique remains of the Ottoman train station, which was the spot of a busy vegetables market. Although the market no longer exists, the production of vegetables is still flourishing around the village, thanks to its exceptional irrigation system, which is more than 3,000 years old.
Battir is one of the last West Bank farming villages that still uses irrigation systems from Roman times. The village’s ancient way of life and irrigation practices are in danger as Israel prepares to lay down its West Bank separation barrier. In addition, the construction of the separation barrier will deface Battir’s natural scenic views. Battir has a charming, rural landscape which was recently recognized by UNESCO with the Melina Mercouri International Prize for the Safeguarding and Management of Cultural Landscapes.

Recently UNESCO has informed the Palestinian Authority that it will accelerate the process of recognizing the ancient terraces near the West Bank village of Battir as a world heritage site. The Palestinians, along with green organizations, hope the designation will reinforce their battle against the separation fence that Israel is building near Battir, south of Jerusalem.

The village occupies a total area of 7,165 dunums and has a total population of about 7,000 inhabitants.

It is said that the name Battir originates from the Phoenician word “Batara”, which means sever and slash as it does in Arabic. Other narratives refer the name to Beit At tair (the house of a bird).  Battir village dates back to the Roman and Canaanite eras, and the residents originate from Iraq and Yemen.

In Ottoman and British mandate times, Battir used to be part of a long string of small villages tied in closely with Jerusalem. Its connection to Jerusalem was cut partially in 1949. Battir and other nearby villages find themselves increasingly hemmed in between large Israeli settlements, various by-pass roads, and until recently, the construction of the separation barrier.

In contrast with other Palestinian villages, Battir also has had a unique agreement with Israel since 1949. The Rhodes Armistice Agreements, signed during the period of Jordanian rule over the West Bank, was implemented by Israeli military leader Moshe Dayan, Hassan Mustafa, and six others from Battir village.

The agreement confirms that “Battir inhabitants will continue having ownership over their lands found within the Jewish Territory.”

Battir is a living example of what a community can do to help itself.

The village on one of the hills round about Jerusalem overlooks a fertile valley which in former times was theirs to cultivate. It was the first stop on the long line which reached from Cairo to Lydda and Jaffa on the plains.

Since 1980, Battir has been governed by a village council which is currently administered by members appointed by the Palestinian Authority.

There was a school for boys during the British mandate but none for the girls. Parents did not like to send their daughters to schools in Jerusalem; education for girls was more restricted in the homes. In the old days, education for girls was hardly considered but a new decade demanded something more in the realm of women’s equality with men. After months of efforts they called on UNRWA for help and a school was opened on February 6th, 1952 in a room adjacent to the spring. This was a popular project and the girls helped to prepare the room and the courtyard. Within 5 years, Battir girls’ school consisted of 7 rooms, 8 teachers, and 8 classes with every girl of school age in the village enrolled. When the first girl married after her graduation, she had her wedding procession, starting from the school.

Religious and Archaeological Sites in Battir:

There are a number of archaeological sites:
Ein AlBalad and Ein Jame’ and a Romanian bathtub.
Khirbet Al Rukba which lies on the northern side of Wadi Battir.
Khirbet Bardmo which is a Roman archeological site.
Khirbet Karsalah which lies on Alhareq Mountain. It has coins since the Roman and Islam time.
Khirbet Alsharqeya which contains caves, grottos and tombs that date back to the Cannanite period.
Khirbet Um Al Shuqaf,  Khirbet Alqaser,  Jameh Spring.
Court of the Seven Widows: It’s in the center of the village. In one corner of the village seven widows were living their remaining years.