The Dome of the Rock

Bethlehem University / The Dome of the Rock 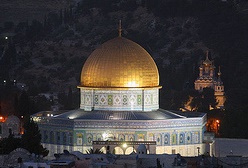 The Dome of the Rock in Jerusalem is a magnificent monument and an added great treasure in world architecture. The area on which it was built is one of the holiest places on earth for Muslims, Christians and Jews alike. Known in Arabic as Masjd al-Aqsa (the farthest mosque), it occupies the centre of a 1.5 million-square-foot esplanade in the Old City that was the site of King Solomon’s temple, where Christ conducted much of his ministry.

The Dome of the Rock was built by the Umayyad caliph Abd al-Malik from 688 to 691 AD. It is the first major sanctuary built by Islam. The extraordinary impression produced by this building is in part due to the mathematical rhythm of its proportions. All the critical dimensions are related to the centre circle circumscribing the rock.

According to Arab tradition, the purpose of the Umayyad caliph Abd al-Malik in building the Dome of the Rock was to commemorate Prophet Muhammad’s ascension into heaven after his night journey to Jerusalem (Surah XVII). The mosque has reflected and represented Islam through most of its 1300 year history, but its location is also associated with sacred events in the lives of Christ, the Virgin Mary, the apostles and Christian saints, along with numerous Jewish historical traditions as well as memories from all three monotheistic religions. The Dome of the Rock is used for private prayer and as a place of Muslim pilgrimage.

The Dome that crowns the Dome of the Rock was originally made of gold. It was constructed by the Fatimids in the 11th century. The Fatimid Caliph Al-Zahir constructed it in 1022, after the original ceiling collapsed, but its entire decoration was the work of the 14th century Egyptian artists, during the period of Mamluk rule in Jerusalem. The golden dome was replaced with copper and then aluminum. The aluminum is now covered with gold leaf, a donation from the late King Hussein of Jordan.

The dome is topped by a full moon decoration which evokes the familiar crescent moon symbol of Islam. It is aligned so that if you could look through it, you would be looking straight towards Mecca.

The beautiful multicolored Turkish tiles that adorn the shrine’s exterior are lifelike copies of the Persian tiles that Suleiman the Magnificent added in 1545 to replace the damaged originals. The lower half of the exterior is made of white marble.

The Arabic inscription around the octagonal part of the Dome of the Rock are verses taken from the Qur’an. The inscription dates from the renovation under Suleiman. The tiled area just below the golden dome is the drum. Its glazed tiles were made in Turkey, and its Arabic inscription tells of the Night Journey of Muhammad as described in the Qur’an (Surah 17).

The decorations on the other sections of the building, mainly mosaics which cover most of the walls of the lower storey, the colonnades and the arches were made by Christian artists who were employed by the Umayyad Caliphs in the 7th and 8th centuries, when the edifice was first constructed. Though they worked in the Byzantine-Christian tradition, they were directed by Moslem supervisors.

The inside of the Cupola of the Dome of the Rock is decorated  with elaborate floral designs and two inscriptions, Ayat al-Kursi the celebrated Throne Verse from the Koran (2:255), circles the apex. The larger inscription commemorates the Ayyubid sultan Salah ad-Din who recaptured Jerusalem from the Crusaders in 1187 and sponsored numerous restorations in the mosque.

Marble, wood, stucco, mosaic and colored glass windows were used by the artists in decorating the interior of the Dome of the Rock.

The architecture is impressive from the exterior, while the interior stuns; rich as it is and sublimely artistic in its decoration. The Dome of the Rock is one of the most splendid buildings in the world. It is described as the most beautiful edifice ever constructed by man.

Pope Francis entered the Dome of the Rock on the third and final day of his visit to the Holy Land.

Pope Francis’ visit came during the Muslim holiday of Isra’ Wa Mi’raj, which Muslims believe is the ascending of Prophet Mohammad to heaven.

Francis took off his shoes to step into the gold-topped dome, according to the Associated Press. He is seen in the above photos greeting the Muslim authorities.