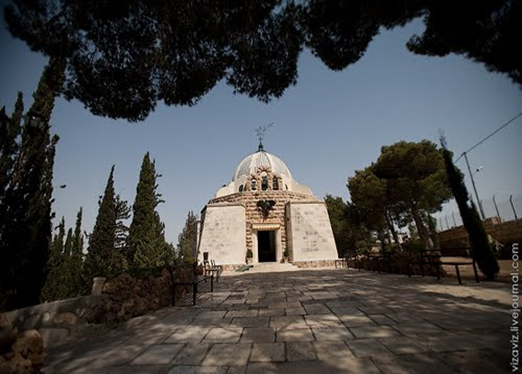 Welcome once again to the Library’s e-turathuna! With Christmas approaching, we are featuring a holy site that is closely knitted to the events that unfolded that joyful eve when the whole world awaited the coming of our Saviour Jesus Christ the Lord.

“GLORIA IN EXCELSIS DEO!”  is the theme echoed during this historical evening with the glorious light of the night pointing to the “little town of Bethlehem.”

The Christmas carol “angels we have heard on high…” speak of the heavenly host announcing the good news of the birth of the Son of God, the Son of Mary, to shepherds whose humility and simplicity found grace with God. This joyous event may have been more than 2,000 years ago, but the place where it happened still reflects the joy, beauty, simplicity which every pilgrim is invited to cherish.

The following featured article is from Professor Qustandi & Sawsan Shomali’s book entitled “A Guide to Bethlehem & the Holy Land.”   Caritas Jerusalem has generously funded the publication of this most notable book, one of its kind, about Bethlehem and the Holy Land.

Permission to upload excerpts from pages 76-80, has been granted to Bethlehem University Library – for its e-turathuna section on the Library Homepage – by the Authors, for which we are truly grateful.

According to ancient tradition, the shepherds received the first tidings of the Nativity in a broad valley in Beit Sahour where they were keeping watch over their flock by night. An angel said unto them, “Fear not: for, behold, I bring you good tidings of great joy, which shall be to all people. For unto you is born this day, in the city of David, a Savior, which is Christ the Lord. And this shall be a sign unto you: Ye shall .find the baby wrapped in swaddling clothes, lying in a manger”. And suddenly there was with the angel a multitude of the heavenly host praising God, and saying, “Glory to God in the highest, and on earth peace, good will toward men”. And it came to pass, as the angels were gone away from them into heaven, the shepherds said one to another, “Let us now go even unto Bethlehem, and see this thing which is come to pass, which the Lord hath made known unto us.” (Luke 2:8-15).

The precise location of the appearance of the angels to the shepherds is unknown, but several sites have been venerated by Christians at different periods. St. Jerome (347-420 A.D.) believed the field to be identical with that in which Jacob, long before, had spread his tent, beyond the Tower of Eder (Genesis 35, 21). He also tells us that the tower itself lies about a thousand paces to the east of Bethlehem. Not long after St. Jerome’s time a church was built nearby. Arnulfus, (670 A.D.) a French bishop who traveled to the Holy Land and toured it for about nine months, related to his host of Iona that he himself visited this church, which contained the tombs of the three shepherds. For centuries a monastery stood on the spot, but there is no mention of a cave until the Crusaders’ time (1099-1187). The tradition of the site, which goes back to the time of the Roman Paula, centered on two locations: one is in the care of the Greek Orthodox Church known as Der Er-Ra’wat, and the other is maintained by the Franciscans and known as Der Es-Siar.

Known as Der Es-Siar (Sheepfold), this site lies 1 km (0.6 mile) to the north-west of the Church of Er-Ra’wat.  It belongs to the Franciscan Fathers and was carefully excavated, revealing a vast monastic agricultural establishment, cisterns and grottos. According to evidence in the field, an early church dating from the 5th century was enlarged in the 6th century, and stones from the octagonal construction of the Basilica of the Nativity were employed in the construction of its apse. The most striking of the remains at Es-Siar is a fine arched cistern in perfect condition. There are also Byzantine remains of mosaic floors, water channels, wine-vats, and the ruins of a group of buildings that suggest a farmstead rather than a specifically monastic establishment.

Among the rooms of the second monastery a few were identified as used for particular purposes such as: a porter’s lodge, a bakery with a big basalt millstone, a refectory, an oil press, a cave-cellar and a stable. Also, a canal system and several cisterns were uncovered. Nearby there are the remains of a watchtower, known as Eder Tower (Tower of the Flocks), which is now incorporated in the Franciscan Hospice. The cave with an altar was traditionally considered as having been inhabited by the Shepherds. Eusebius of Caesarea, bishop and scholar, writes that the Eder Tower, a thousand paces from Bethlehem, marked the place where the shepherds received the heavenly message. This was understood to be the Migdal Eder mentioned in the Old Testament (Genesis 35:21). Just below the valley, to the north of the Franciscan convent, is a Greek Orthodox building known as Little Mar Sabas, where a monk lives and takes care of the surrounding olive groves.

A new Church was erected near the traditional site of the underground Church of the Shepherds. Archimandrite Seraphim, spiritual father of Monastery of Mar Sabas, built in1972, a modern, full-sized church near the Cave Church. While excavating the foundations for the new church, he found the ruins of three different churches from the fifth, sixth and seventh centuries. To preserve these precious remains it was decided to build the new church adjacent to, rather than immediately above, the cave. The new church has three holy altars, which are dedicated as follows: the main altar to the Mother of God, the altar on the right to the great martyr and healer, Saint Panteleimon, and the altar on the left side to the archangels Michael and Gabriel and all the heavenly hosts.

This guide was  published / printed through the generous funding of Caritas Jerusalem.  Income generated from the sale of this book will be for charitable purposes.