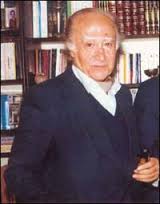 Born in Bethlehem in 1920, Jabra is a prolific writer and artist with works ranging from Palestinian novels, poetry, short stories, essays to paintings, literary and art criticism as well as Arabic translations of Shakespeare’s plays and sonnets.

He began his studies at the Syriac school where he learnt English and Assyrian, continuing later at the Bethlehem National School. When he was 12 years old, he went to the Ar-Rashidiyyah School in Jerusalem. There he met outstanding teachers such as Abdul-Karim Al-Karmi, Ibrahim Touqan, and Ishaq Mousa Al-Husseini. Upon completion of his high school education, he studied at the Arab College in Jerusalem.

Jabra was awarded a scholarship to study English literature in England and completed a Bachelor of Arts degree in 1943, then a master of arts in 1948 at Fitzwilliam House, Cambridge University.

Back in Palestine after his successful studies, he taught English Literature  in Jerusalem for approximately five years, from 1943 till the end of the British mandate in 1948. Losing his home in 1948, he was forced into exile and went to Iraq, where he taught English Literature at the College of Arts of the University of Baghdad (1948-1952). Jabra played a key role in developing the art heritage in Palestine of the 1950s although he never returned to Bethlehem, which was truly a loss for the country.

While in Iraq, his literary career flourished. He contributed to the Iraqi art movement, and he became an active member of the Baghdad Modern Art Group established in 1951 under the direction of the preeminent Iraqi artist of the time, Jawad Salim.  His western observers described Jabra as striving to integrate Western thought with local aesthetic perspectives which served both his political stance vis-a-vis the Palestinian struggle for self-determination and the role of modernist art in the era of post-World War II.

Jabra was appointed head of publications at the Iraq Petroleum Company in Baghdad in the years spanning from 1954 – 1977.  Earlier he was given a research fellowship of two years at Harvard University (USA).

Jabra is better known as a writer and an art critic, but he will always remain as one of the pioneering Palestinian artists of the twentieth century. Jabra used oil colours to paint on the canvas of gunnysacks, wooden panels, and glass which were innovative and not very commonly-used media. Women and nudity repeatedly appear in Jabra’s paintings. The inner side of the artist seem to be depicted clearly in his paintings, some of which are signed Gabriel Jabra.

The majority of what Jabra painted was done more as an amateur and  most have been done using oil. Painting occupied him mentally and psychologically,  especially in the years before his exile from home, between 1946 and 1948. Although Jabra never held any exhibitions during this period, his house in Bethlehem was nevertheless open to anyone who wanted to view his paintings.

Jabra produced about 60 literary works in Arabic and English over a period of forty years. He translated thirty books from English into Arabic, among which were several of Shakespeare’s plays: Hamlet, King Lear, Othello, The Tempest, Twelfth Night, and Creolanius. Some of his own works in Arabic were translated into English, French, Spanish, Italian, Slovac and Serbo-Croatian. Professor Issa Boulata translated his autobiographical novel ”The First Well.”

abra died in Bagdad in 1994 leaving behind him an art inheritance that was unfortunately destroyed during the explosion of his house in April 2010. This tragic incident represented the loss of an important documentation of a stage in the Arab art movement in the mid-twentieth century which is now irreplaceable.

A two-day conference on “Jabra Ibrahim Jabra” from the 28-29 August 2004 was hosted at Bethlehem University. Nineteen papers on various aspects of Jabra’s literary works were presented and discussed by a number of Palestinian academicians and literary figures. The Prince Claus Fund (the Netherlands) sponsored this conference with some other foundations.

Ten years later, on the 7th of October 2014, on the occasion of the University’s Jubilee of 40 years, George Al-Ama (BU’04), also a Bethlehemite, generously loaned out Jabra’s five paintings from the family collection to be on display at the Turathuna Centre.

The opening of the exhibition was graced by Her Honor, Mayor Vera Baboun; Brother Peter Bray, Vice Chancellor; Dr. Irene Hazou, Vice President for Academic Affairs; present also were the Executive Council members, the PALICO member-librarians and other guests