THE MONASTERY OF “MAR SABA” 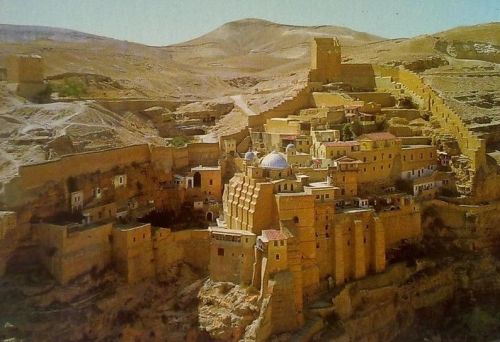 Over 100 monasteries flourished in the Judean desert to the east of Bethlehem during the fourth through sixth centuries. The monastic movement became quite successful so that more than a hundred of monasteries as a way of life blossomed in the desert. Monasteries are places where monks sometimes shared their whole life together and in other cases gathered only for a weekly Eucharist after living separate lives in surrounding caves.

A number of the ancient monasteries, including Theodosius and Mar Saba, are still active today. During the Persian invasion (614 A.D.) the monastery of Mar Saba was damaged, and restored in 629 A.D. During the Turkish rule it was raided several times by the local Bedouins. It was also damaged in an earthquake during the 19th century, but restored later by the Russians.

Saint Saba: He was the founder of several monasteries, most notably the one known as Mar Saba. Mar means “saint” in Aramaic and the saint’s name is also derived from Aramaic (Saba’) meaning “old man.”

Saba was born at Mutalaska, near Caesarea of Cappadocia; his parents were John, a military commander, and Sophia. Journeying to Alexandria on military matters, his parents left their five-year-old son in the care of an uncle. When the boy reached eight years of age, he entered the nearby monastery of Bishop Flavian of Antioch. The gifted child quickly learned to read and became an expert on the Holy Scriptures.

When he was 18 he left for Palestine and joined the monks Euthymius and Theoctistus. At the age of 30 he was granted the permission to live in seclusion, and wandered for 5 years in the desert. Saint Saba founded other monasteries. Many miracles took place through the prayers of Saint Saba and there were also healings of the sick and those possessed. After being instructed by a vision, he stayed for five years in a cave in Wadi Kidron assisted by local Bedouins who fed him with bread, water, and dates. During full moon one evening, he heard the hoofs of a donkey trampling upon the ground. He took a trowel, went to the place, and dug the earth away to discover water flowing from a well. There he built a church and assembled monks who stayed in his “Laura” (or “Lavra”) – a term in Orthodox Christianity which referred to a cluster of caves or cells where hermits resided; and located around a central monastery where the monks congregated once a week for the Eucharist, leaving their isolated cells.

Saint Saba directed the great Laura of the convent – which also provided them with supplies they needed – for nearly 50 years. During the years the place was expanded in order to accommodate the hundreds of monks who resided here, and walls were constructed in order to provide protection.

Mar Saba’s architectural complex has, as its most noteworthy features the cupolas, painted bright blue, and the enormous enclosure wall reflecting clearly a piece of defensive construction; the walls are very thick and are well arrayed, the windows are a little more than loopholes, and the entrances are narrow and low, and are girded with wide portals. The gate to the monastery is very small but is well known for its huge key. There is a guard’s tower where monks used to take shifts watching the road for caravans coming from Jordan and other countries of the Fertile Crescent

to Jerusalem, carrying goods and supplies.

In and Around the Monastery of Mar Saba

•   Relics of St. Saba the founder:  Saint Saba died in 532 at the age of 93; he was buried in the yard of the monastery. The relics of Saint Saba were placed in a glass box showing that his body has shrunk a bit. The Crusaders, upon leaving the Holy Land, took his body to Venice, Italy where he was laid for more than seven centuries before he was brought back to his “own place,” the monastery of Mar Saba in 1965.

First Church of the Monastery: This Church was dedicated to St. Nicholas and established in the year 491 AD. The Lord has revealed this Church to St. Saba, while he was still living with his disciples in the caves.

•   The Main Church in the Monastery: Constructed during the days of St. Saba in the year 502 AD, and dedicated in honor of the Annunciation of the Mother of God. The relics of Saint Saba are found here.

•   Rocky Hermitage of St. John of Damascus: He had lived here during the eighth century.

•   Justinian Tower: This tower was constructed in the 6th C. A.D. with a height of 18 meters and was used for observation. It contains many old icons, books, and manuscripts that are invaluable and unique.

St. Saba Water Spring: This is found below the monastery, at the bottom of the valley, where there are 385 steps from the Justinian Tower until the very place of the holy spring water. The Lord has revealed the place of the spring to St. Saba to give water to his monks who were suffering from severe thirst at that time.

Hermitage Cells for the Monastery – 110 cells.